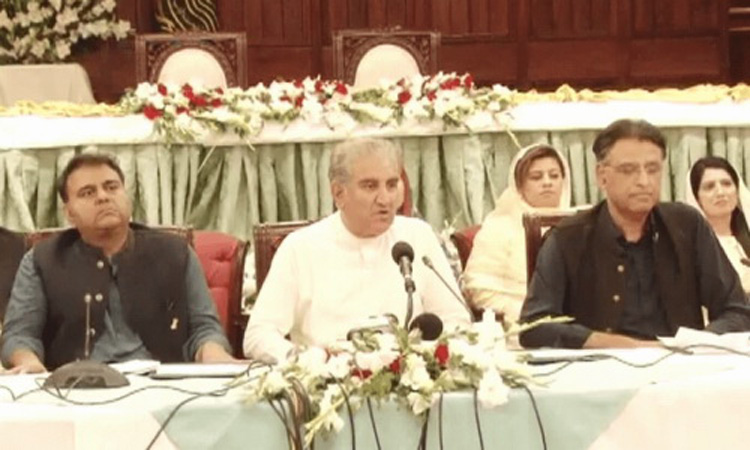 Umar said Khan has never uttered a word to weaken the institution. “[In their press conference, the military officials] said that levelling allegations against the institution’s leadership was inappropriate […] but I would like to ask that if the leadership of the armed forces has its importance, then doesn’t the reputation of country’s biggest leader matter?”

The PTI leader said that it was indeed important for both sides to rethink their positions.

The PTI leader praised the armed forces for sticking to their Constitutional role, but asked the military what were the unconstitutional demands that Khan made during closed-door meetings. “The political, economic, and social crises that are taking place in the country are unprecedented and early elections are the only solution for it,” Umar said.

But Umar noted that Khan had demanded the military to use its influence for stability in the country, and it is not “unconstitutional”. “All the things that are being discussed behind closed doors aren’t secret. Imran Khan has discussed them in rallies and press conferences.” “However, it is important to seek answers as to why this situation is arising in the country. We need to think about it, but when we will take a look at the events that transpired, we will see that institutions have also made some mistakes,” he added. “DG ISI said that then-prime minister Imran Khan told him that the then-opposition leader was the biggest problem in the country. He was right, it has been proven via literature that the law should be upheld otherwise a country cannot progress,” Umar said.

Umar added that the DG ISI mentioned that in the past, Pakistan was divided into two parts due to “hatred”. “It happened because the wishes of the people were not respected.” Earlier, at the outset of the presser, PTI Vice President Shah Mahmood Qureshi said that on May 25, the party’s rally was “attacked” by the then-Punjab government. “We could not defend ourselves. The way our people were tortured and put behind bars is in front of everyone,” the former foreign minister said.

Qureshi assured the journalists that the PTI’s long march would remain peaceful and the party would march towards Islamabad in line with the Constitution. In response to PTI leader Faisal Vawda’s press conference, Qureshi said that it was aimed at creating a sense of fear among the masses as people were “enthusiastic” for the long march.

Reiterating that the PTI’s policy was clear regarding a peaceful long march, Qureshi termed yesterday’s presser an “attempt to damage the confidence that people have in PTI which – in our opinion – failed because the details came to the forefront soon.”

He elaborated that news channels that don’t give coverage to PTI, especially PTV, showed the entire press conference of Vawda live, soon after which messages from London [Nawaz Sharif] started pouring in which linked all the missing dots, “highlighting that it was a pre-planned move.” “The coalition government is propagating the narrative that the PTI wants political instability, however, we have no such intentions,” Qureshi said, adding that the country is already facing political instability which began when they [ruling alliance] planned the no-confidence motion against Khan.

Renewing his demand for a free and fair snap poll, the former foreign minister said that elections can bring the “much-needed stability in the country.”

Qureshi assured journalists that the PTI’s long march would remain peaceful and the party would march towards Islamabad in line with the Constitution. “I urge people to participate in PTI’s long march with enthusiasm, without any fears, as it is a step towards Khan’s ‘Haqeedi Azadi’ agenda,” he said, advising them to have trust in the leadership.

Addressing the constant criticism over the “foreign cypher”, the PTI leader said: “We have been constantly saying that the cypher was and is a reality.” He recalled that when a meeting was held regarding the cypher, “where I was present along with Imran Khan and Asad Umar we were informed that cypher is an important issue and a demarche should be issued to the ambassador over this, following which several sessions, including one of the National Security Committee, was called. “If it was a conspiracy [as the ruling alliance claims it to be] then what was the need for demarche and why was it referred to as political interference?” Qureshi raised questions, rejecting all accusations regarding PTI forcing the Pakistani ambassador to do such a thing.

Qureshi recalled that the Pakistani ambassador said he had never seen such language in his entire diplomatic experience. “We did not build any narrative that could harm Pakistan,” he said, adding that the PTI has always respected the institutions and defended them at every turn.

For his part, Fawad Chaudhry said ISPR’s presser came as a “shock”, adding that President Dr Arif Alvi wrote a letter to the Chief Justice of Pakistan Umar Ata Bandial informing him about the nitty-gritty of the cypher.

Regarding journalist Arshad Sharif’s killing, Fawad said that the threats received by the deceased were “not hidden from anybody as he had also informed the president about the threat to his life in a letter.”

The former information minister clarified that Sharif did not leave Pakistan on the directions of the Khyber Pakhtunkhwa government; “he left Pakistan because he wasn’t being allowed to speak.”

Meanwhile, former human rights minister Shireen Mazari said she was “very saddened” by the DG ISPR’s press conference and termed it as a totally “untruthful statement”.

She questioned how the DG ISPR had deduced that Sharif was under no threat, given that he was “brutally murdered” eventually. Mazari said Sharif had told her that he was being targeted by assassins and there was a bounty on his head.

She said that Sharif was from a military family himself and had done many programmes in collaboration with the army. “What respect did you show [to him?] You got him martyred and whoever committed this brutal targeted murder are the same as those who threatened him and now our institutions are saying there was no threat,” she alleged. Mazari added that a judicial commission should be formed to probe Sharif’s killing but also bemoaned that similar commissions in the past had either produced no results or their findings went missing.