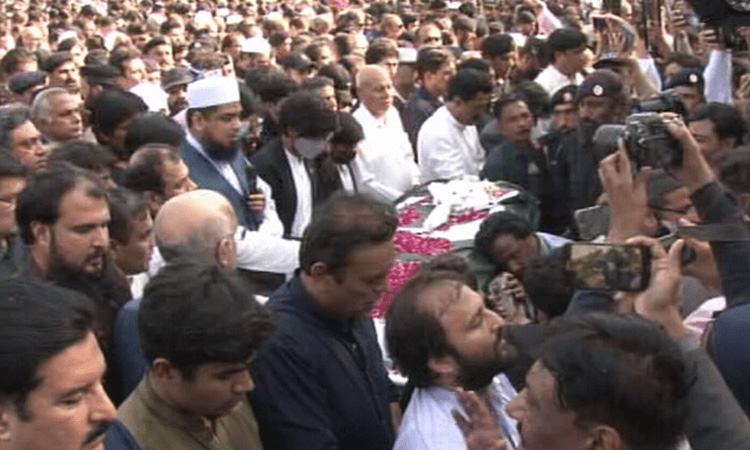 Slain journalist Arshad Sharif – who was shot dead amid mysterious circumstances in Kenya on Sunday last week – was laid to rest at the H-11 graveyard in Islamabad on Thursday with hundreds of people in attendance.

A large contingent of police was deployed at the graveyard where journalists and members of the civil society reached in huge numbers. During Sharif’s burial, slogans of “Allahu Akbar” were chanted. Afterwards, personnel of the Pakistan Army paid tribute to the journalist and a garland from Chief of Army Staff Qamar Javed Bajwa was laid at his grave.

An AFP report, citing police personnel deployed at the scene, said the mosque drew up to 40,000 mourners, with people spilling into the gardens and surrounding streets. Supporters of the PTI made up a large proportion of the crowd, waving flags and shouting “Arshad, your blood will bring revolution”, the report said.

“Arshad Sharif sacrificed his life to expose the faces of the corrupt and we should not let that sacrifice be for nothing,” Muhammad Iqbal, a 35-year-old shopkeeper and PTI supporter who had travelled from the neighbouring garrison city of Rawalpindi, said while speaking to AFP. After prayers, coffin bearers struggled to push through the crowd to a waiting ambulance for onward passage to a graveyard.

Meanwhile, PTI Chairman Imran Khan along with other PTI leaders offered the funeral prayers of the slain journalist in absentia in Lahore. The prayers were attended by PTI leaders Asad Umar, Shah Mahmood Qureshi, Shahbaz Gill, Hammad Azhar and others.