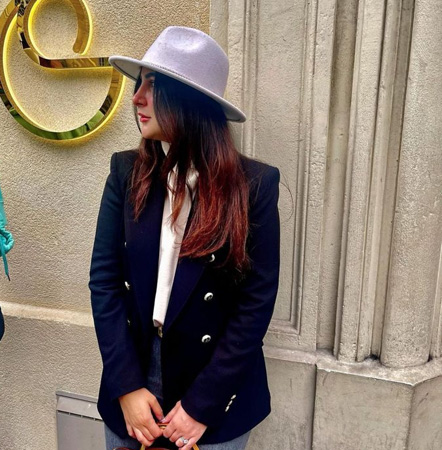 ‘Jalan’ star took to her official account on the photo and video sharing social application, Tuesday and posted new clicks from her trip on the feed. “Obsessed,” she wrote in the caption of the eight-picture gallery.

The shared snaps see Areeba Habib embrace her fall style as she donned a blue pair of skinny jeans with a neutral-toned turtle neck. The fashionista styled the chic look with a blazer, long boots and a tan bag, to stroll around the city.

The viral Instagram post was liked by thousands of fans of Habib on the social platform, who also dropped lovely compliments for the actor in the comments section.

Areeba Habib, who received praise for her performance in ‘Jalan’, ‘Angna’ and ‘Koi Chaand Rakh’, got engaged to Saadain Imran Sheikh last year. The couple married in December.

It is pertinent to mention that the actor moved to Germany earlier this year. After her marriage, the actor announced that his husband lives and has his business in the country, hence she will be moving there with him.

Speaking about her married life, the actor also said there were no significant changes in her life following her wedding.