Imran playing a dangerous game by casting aspersions on institutions 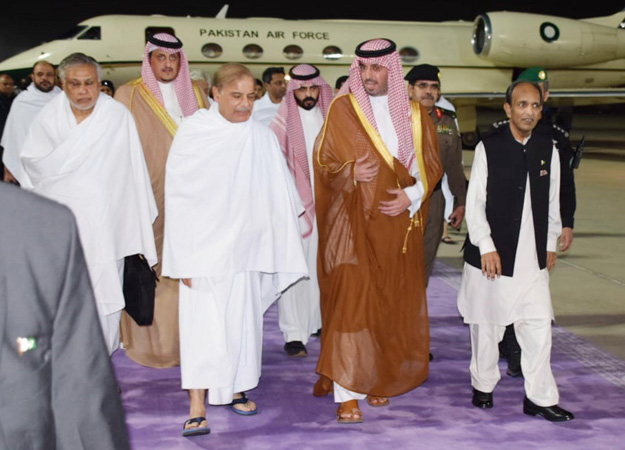 “Imran Niazi is playing a dangerous game. He is using tragic killing of Arshad Sharif for petty politics and going to the extent of casting aspersions on state institutions,” the prime minister wrote on Twitter, prior to concluding his visit to Saudi Arabia where he attended an investment summit, offered Umrah and paid respects at Roza-e-Rasool (Peace Be Upon Him). The prime minister urged the Pakistan Tehreek-e-Insaf Chairman Imran Khan to be patient and wait for findings of Judicial Commission instead of resorting to the baseless allegations.

On Tuesday, the prime minister had decided that Arshad Sharif’s killing in Kenya would be probed by a high level judicial commission for what the government would request the Islamabad High Court to designate a judge for the purpose. He also assured the nation for a transparent probe into the tragic incident and bringing forth the facts to the nation. Meanwhile, Prime Minister Shehbaz Sharif has paid his respects at the Roza-e-Rasool (Peace be upon Him) and prayed for the solidarity of Pakistan and prosperity of its people. The prime minister offered prayers at the Roza-e-Rasool (PBUH).

Shehbaz Sharif along with his delegation also paid respects at the shines of the martyrs of Ghazva-e-Uhad. Earlier, Governor Madinah Prince Faisal bin Salman bin Abdulaziz received the prime minister on his arrival at the Madinah airport.

Prime Minister Shehbaz Sharif on Wednesday concluded his official visit to Saudi Arabia where he attended the Saudi Future Investment Initiative Summit and met the leadership of the Kingdom. During his stay in the Kingdom, the prime minister presented the viewpoint of Pakistan at the summit regarding the economic challenges facing the world.