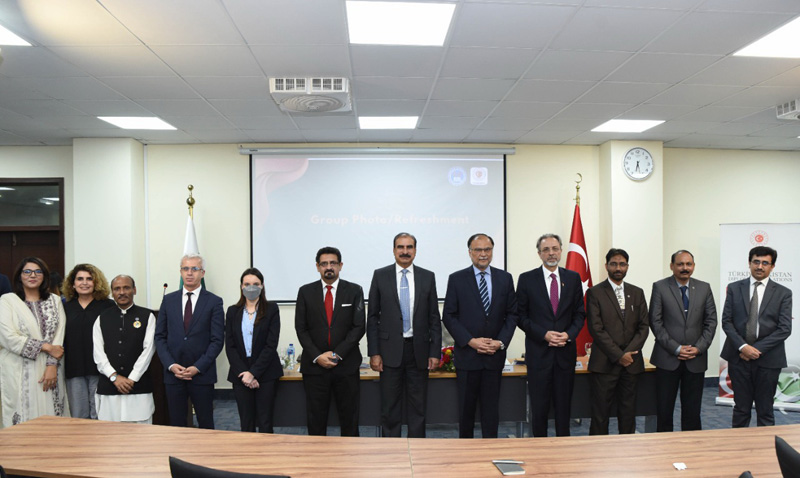 Federal Minister for Planning, Development & Special Initiatives Ahsan Iqbal said that Pakistan and Turkiye are two countries but one nation. Turkiye supported Pakistan on every regional and international front and both the countries have deep-rooted historic, cultural and cordial bilateral relations with each other. He said that during the recent horrific flood Turkiye’s help and support was unprecedented and unsolicited. The Minister paid warm gratitude to Turkish President Recep Tayyip Erdogan for his immediate support in the relief activities during the crisis. He was expressing these views on the closing ceremony of an International Conference on Celebrating 75th Years of Turkiye-Pakistan Relations as chief guest at the National University of Modern Languages (NUML) on Wednesday. Turkish Ambassador to Pakistan H.E. Prof Dr. Mehmet Pacaci, Rector NUML Major General Muhammad Jaffar HI (M) (Retd), Pro-Rectors, Deans, Directors, HoDs, faculty members and a large number of students also attended the ceremony.

Federal Minister Ahsan Iqbal while addressing the youth stressed the need of peace and harmony and advised them to keep away from internal polarization and the forces of propaganda. He said we must learn from Turkiye in this regard.

Earlier, inauguration ceremony was held in which former Ambassador and Foreign Secretary Sohail Mahmood was the chief guest while Turkish Ambassador H.E. Prof Dr. Mehmet Pacaci, Director General NUML Brig Syed Nadir Ali and Dean languages Prof. Dr. Jamil Asghar Jami shared their thoughts on the bilateral relations of Pakistan and Turkiye. Later scholars from Pakistan and Turkiye presented their papers on the said topic in two sessions. The conference was also attended by Ambassadors and diplomats from brotherly countries.