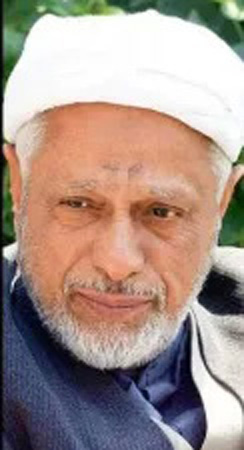 In Indian illegally occupied Jammu and Kashmir, the All Parties Hurriyat Conference leaders have paid rich tributes to senior Hurriyat leader, Maulana Abbas Ansari, who passed away in Srinagar, yesterday.

Illegally detained senior APHC leader, Ghulam Ahmad Gulzar, in a message from Srinagar Central Jail expressed profound grief and sorrow over the sad demise of Maulana Abass Ansari and termed it as an irreparable loss to the ongoing Kashmir freedom movement. He said the services of the deceased leader for the Kashmir cause will always be remembered.

Ghulam Ahmad Gulzar said that besides being a visionary political leader, Maulana Abass Ansari dedicated his entire life for humanity and fought for the political, social, religious and basic rights of the oppressed Kashmiri people. He said Maulana Abass Ansari as the APHC chairman made every effort for the resolution of the Kashmir dispute in accordance with the wishes of Kashmiris and relevant UN resolutions. Maulana Abass Ansari was arrested and imprisoned for pleading Kashmir case but he remained steadfast and never bowed before Indian oppression, he added.

APHC leaders, Khadim Hussain and Syed Sibte Shabbir Qummi, in a joint statement issued in Srinagar said that in the demise of Maulana Abbas Ansari, the Kashmiris lost a selfless leader of freedom movement as well as a great religious scholar. They said that the valuable services of the deceased for the Kashmir cause and the Kashmiri society will always be remembered. They extended heartfelt condolence to the bereaved family and prayed for the departed soul.

APHC leaders, Mir Shahid Saleem, Muhammad Yusuf Naqash and Imtiaz Ahmad Reshi, in their statement in Srinagar termed the death of Maulana Abbas Ansari as an irreparable loss to the Kashmiri people and freedom movement. They maintained that the deceased was a courageous leader as well as a supporter of Muslim unity and his services in this regard are unforgettable.

Jammu and Kashmir Awami Action Committee (AAC) at a condolence meeting in Srinagar, today, expressed deep grief and sorrow over the demise of Maulana Muhammad Abbas Ansari. The meeting on behalf of on behalf of the party chief Mirwaiz Umar Farooq paid tributes to the senior leader for his invaluable political, religious and services.

Meanwhile, APHC-AJK leaders including Muhammad Sultan Butt, Mushtaq Ahmad Butt and Syed Mushtaq Hussain in their statements issued in Islamabad also expressed grief and sorrow over the death of Maulana Abass Ansari. They said that he was man of peace and believed in peaceful resolution of the Kashmir dispute through meaningful and result-oriented dialogue among Pakistan, India and genuine Kashmiri leadership.