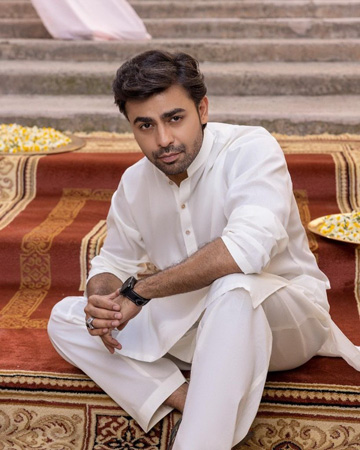 Actor-singer Farhan Saeed recently appeared on a TV show for his upcoming film “Tich Button” was questioned about India’s statement regarding their visit to Pakistan for Asia Cup 2023.

Answering the question, called India’s response “childish” and reminded the panel that it has been happening for quite a while.

Recently, the actor joined Kamran Akmal, Younis Khan, Tanvir Ahmed, Aadi Adeal and Mustafa Chaudhry as part of the promotions for his film and a healthy discussion on Pakistan’s upcoming cricket tournaments and matches ensued. Then came the topic of India’s decision to back out of next year’s Asia Cup. “If this is what they do and the World Cup takes place, then Pakistan should host a PSL here, the entire nation should go and see it, and boycott the World Cup because this is stupid and childish and has been happening for quite some time,” said Saeed.

The “Mere Humsafar” actor suggested that we need to respond, as suggested by Khan and Akmal. He urged the PCB to promote cricket and take a stand where needed. “I think we should we shouldn’t be scared of anyone at this point because if in the T20 World Cup the number one and number three batsmen are absent, that will be one dull tournament. So they should also realise by now that their value is no longer the same as the team that never lost a World Cup. We are capable of responding back so they should just back off a little,” said Saeed.

Shifting the focus to the former cricketers next to Saeed, Badami said that the “Sajni” singer carries the sentiments of the people. Khan, the former batsman agreed with Saeed and said any cricket fan around the world would agree with them and their stance, which is that matches between India and Pakistan must take place, with both teams visiting the countries.

Earlier, Indian cricket board’s Secretary Jay Shah ruled out the possibility of the Indian Cricket team visiting Pakistan for the 50-over Asia Cup next year, saying that they had decided to hold the tournament at a neutral venue. “It’s the government that decides over the permission of our team visiting Pakistan, so we won’t comment on that but for the 2023 Asia Cup, it is decided that the tournament will be held at a neutral venue,” Shah, who is also the president of Asian Cricket Council, said.