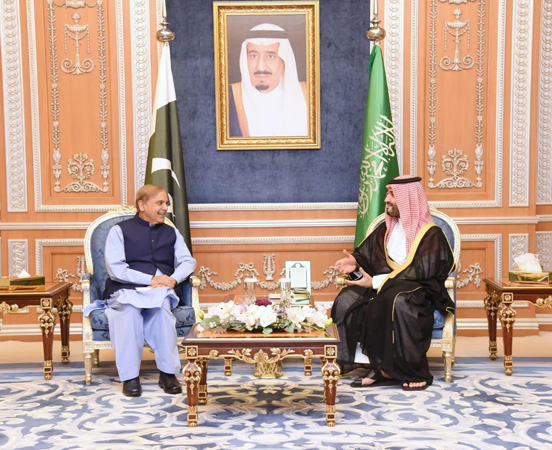 Prime Minister Shehbaz Sharif on Monday underlined the need for combined efforts to explore the true potential of clean energy resources, coupled with utilization of modern tools and technical gadgets to fully harness the talents of young generations and explore future avenues for progress and prosperity.

Addressing at ‘Future Investment Initiative’ conference, he said that clean energy potential would be the new driver of economic prosperity and stressed upon the world community to come forward and support these joint efforts.

“Nothing could be of more importance to us than this very challenge: how to ensure that our collective tomorrow is better than our today. And that we are ready for it; that we have the tools, skills and technology which enables us not just to navigate the complex world of tomorrow – but to also shape it today in a manner that has the most beneficial impact on humanity,” he added.

He said that they were living through truly transformational times, adding throughout history such times have triggered political, social environmental and economic changes. These changes had been powered by imagination, innovation and action. “Yes bold, decisive and consequential action. But the pace of transformation and change was never as swift as it is today. With the power of technology driving the world towards a future few could imagine in the past, we are well positioned to harness the dynamics of change,” he added.

The prime minister said tech power was a great equalizer, adding it could cut through social, cultural and financial barriers and empower those who were equipped to leverage it. He emphasized upon taking of innovative and bold steps in the technological fields which had brought about consequential changes in every sector of life. The latest technological innovations had been driving the world to such changes which were hardly think of in the past, he added.

In Pakistan, he said that he had seen with a sense of deep satisfaction how young women and men were crafting their careers – and boosting their earning power – by using tech in diverse field within the larger digital matrix like e-commerce. “I believe Pakistan is uniquely placed to leverage this change. We have one of the youngest populations in the world. Most of these youngsters are equipped with the tools of the new digital world. They are hungering for more skills and more opportunities. Their talent is already recognized, Pakistan is the fourth most popular country for free lancing,” he added.

The prime minister said this combination: a large and young digital savvy population, and a massive unmet demand that simply could not be addressed through existing means of production. Today, a family in urban and rural Pakistan has access to mobile phones and internet, aspired to high education standards, wanted to buy consumer products, and needed everything from insurance to healthcare, he added.

The prime minister said the significance of this consolidated demand could be well appreciated and recognised by investors and entrepreneurs present there. “Pakistan is ripe for market innovation. A new generation of Pakistani entrepreneurs are shying away from traditional businesses and turning their focus and energies to disruptive innovations,” he added.

The prime minister said that he had deep confidence in the young generation of Pakistanis. This was why he was fully prepared to invest the resources of his government in providing them an enabling environment for innovation. He noted that while technology was unleashing new potentials, the world was also undergoing cataclysmic changes. “Global warming is upon us. Extreme temperatures, over time, are changing weather patterns and disrupting the usual balance of nature and our ecosystem. Countries like Pakistan, with negligible carbon footprint, are vulnerable to the adverse impact of Climate Change,” he added.

Prime Minister Shehbaz Sharif further elaborated that Pakistan had experienced historic heat wave in March and torrential rains from June to August this year which led to unprecedented floods. “These rains and floods have impacted 33 million people, and more than 1,500 people have died. More than two million houses have been damaged, and over 3.5 million acres of crops have been lost, with farmlands, orchards, bridges, and road networks destroyed,” he added.

The prime minister expressed the resolve that they were committed to rebuilding lives, livelihoods and climate resilient infrastructure. Sustainability thus was predicated on climate action now. As societies placed greater premium on sustainability, he said the clean energy was the driver of the new economy, he said and mentioned his administration in Punjab province which had explored solar power in 2012 and established a 1000 MW solar power park in Bahawalpur, south of Lahore. It was since producing 400 MW, with spare capacity to generate the balance. “As Prime Minister, I am spearheading the development of 10,000 MW of solar power to meet Pakistan’s peak load demand and lessen reliance on fossil fuel. It is a great opportunity for investors who are looking for attractive returns,” he added. The prime minister said that the economy of Pakistan could no longer afford the import of costly oil to generate power.

He said Pakistan’s infrastructure development needs were huge and they were upgrading their rails, ports, airways, water, gas, power and digital infrastructure. “With a young and growing population, the market is expanding. Our government is enabling private enterprises to drive the economy. The government is investing in public goods; these too are available for partnerships,” he said and urged the participants to participate in these innovative business opportunities and assist in unlocking Pakistan’s potential while earning profitable returns on their investment.

The prime minister said Pakistan had many higher educational institutions and some were recognized internationally and proposed that the Future Investment Initiative should consider establishing a satellite center in one of Pakistan’s leading universities to explore the rapidly growing Pakistani market and spur entrepreneurial innovation among their young population.

The satellite could become the center of a network of researchers, innovators, investors, and service providers to harness the capacities which, if optimized, would take Pakistan to a higher level of social and economic development, he opined. The prime minister said that his curiosity to learn and fascination for technology had led to close interaction with subject experts who had guided him to employ technical tools and expertise to improve governance.

“Serving as the chief minister of the province of Punjab for a decade, I saw the fruits of my policies when I introduced tech innovations in the educational and health sectors,” he said and mentioned that these initiatives set free new ways of public service delivery; improving access and quality and empowering the citizens to hold the government to account. “Using technology, we provided conditional cash transfers to school girls, supported specially-abled people, gave timely agricultural inputs to farmers, provided free laptops to thousands of deserving students, established a hi-tech safe city project, set up smart schools, introduced digital technology in our immunization programme, and linked markets for more equitable buying and selling,” he said.