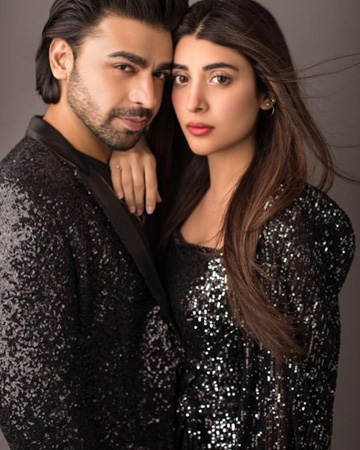 Lollywood diva Urwa Hocane and heartthrob Farhan Saeed have re-united for the promotion of their upcoming film Tich Button.

Recently, the Tich Button team did a surprise launch of the new song “Mein Ni Boldi” from the movie and needless to say, the Karachites were completely ecstatic.

The nearly two-minute song dropped on Sunday and opens with Sonya Hussyn in a white lehenga choli and traditional jewellery dancing at what seems like a wedding from the film. Twirling in the centre, right after Hussyn is done dancing comes Feroze Khan with whom the actor is seen conversing briefly before the scene shifts to Farhan Saeed’s entrance in a sherwani that signifies that he could be the groom everyone is celebrating. The song has racked up 118,063 views since its release on YouTube and received approving comments from netizens under the video. They loved Hussyn and Iman Ali’s performances as well as their sizzling chemistry with their love interests Khan and Saeed. People said Hussyn was “killing it” in the song.

‘Mein Ni Boldi’ is the second song from the film to release in the span of two days since Saeed’s ‘Ehsaan Hai Tumhara’. The film revolves around Saeed, Hussyn, Ali and Khan with their love interests changing with one trip to Pakistan.