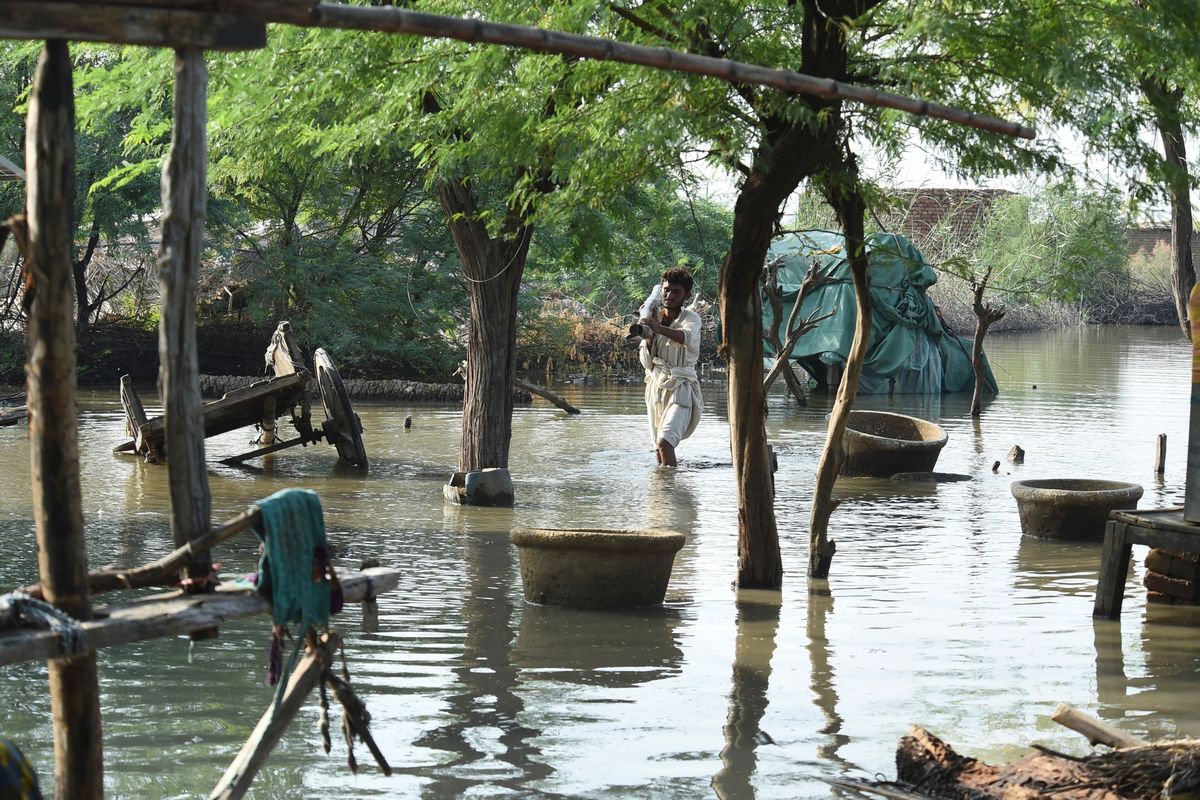 Generations of Rahim Buksh’s ancestors have laboured in the rice paddies and wheat fields surrounding Pakistan’s hottest city, no strangers to intense summers or monsoon rains.

But this year Jacobabad lurched from record heatwaves in May to an unprecedented deluge of rain in August that drowned crops.

The floods forced tens of thousands of people to flee for makeshift camps and relatives’ homes, leaving them doubting the future of farm work despite their deep connection to the land.

“We would move to the cities and take up manual labour work if somebody helped us to get out of here,” said Buksh, whose mud-brick home was flooded, like much of the surrounding farmland.

Even before the destruction, Jacobabad and dozens of nearby villages were crippled by poor infrastructure.

Most of the district’s million-plus population are itinerant farm workers, earning a daily wage tending crops for major landowners.

Poverty, debt and the unequal distribution of land have made their livelihoods precarious, but the rise of extreme weather events linked to climate change has deepened the insecurity.

This year’s crops were first scorched by temperatures that reached 51 degrees Celsius (124 Fahrenheit) in May, only to be drenched by monsoon rains that affected a third of the country –- a scale never seen in Pakistan.

“We have to live with it all,” said 25-year-old Zamira, who fled with her husband and children to a makeshift camp. “It will be months before we can work again. We’re abandoned.”

The agriculture sector is by far the biggest employer in Pakistan, accounting for more than 40 percent of the labour force, the majority being women.

Community NGO worker Jan Odhano, who has provided emergency relief to victims of both the heatwave and floods, said the “double disasters” left farm workers desperate for a way out.

“They think can get work in the big cities more easily. Men can work in the factories,” he told AFP, adding that a wider range of work opportunities are also available to women.

Many of the flood-displaced in southern Sindh province have sought shelter in urban centres, including tens of thousands recorded at relief camps and many more in the homes of relatives or rental properties.

With homes and livelihoods washed away, some are expected to abandon their rural lives, heaping pressure on already-swelling cities grappling with a long-term “major crisis of urban governance”, according to Nausheen H. Anwar, a professor of urban planning in Karachi.

“We are not prepared for what’s going to happen,” she said of migration due to climate change. “These flows are going to be inevitable.”

Muhammad Hanif, 20, has had enough after seeing his livestock perish and crops wrecked.

“It is unliveable here. There is no work left. We will have to go to Karachi.”

The standard of living in the southern megacity of more than 25 million is little better for impoverished arrivals.

“We really need to put more focus on cities and their governance systems,” Anwar said. “Rural is important, but so is the urban, and they’re both interlinked.”

Between six and nine million Pakistanis are set to be dragged into poverty as a result of this year’s cataclysmic monsoon flooding that has sent food prices soaring and is estimated to cost at least $30 billion in loss and damage, according to government estimates .

Even before the deluge, Pakistan’s economy was struggling, with soaring inflation, a plunging rupee, and dwindling foreign exchange reserves.

Calls are growing from the government and activists for richer and more industrialised nations with larger carbon footprints to offer debt relief to Pakistan as a form of climate justice.

Demands for the largest emitters to take financial responsibility for the climate chaos impacting poorer nations is expected to dominate a UN summit next month.

Pakistan, the world’s fifth most populous country, is on the frontline of climate change, despite being responsible for just 0.8 percent of global emissions.

Studies have found climate change has intensified the heatwaves –- making them hotter, earlier, and more frequent.

The monsoon was also far heavier than usual, destroying 9.4 million acres of crops and orchards.

“The climate change ministry should be as important as the foreign ministry or finance ministry,” climate scientist Fahad Saeed said.

As well as emergency relief, the country needs technical support, investment in green energy and early warning systems to prepare for the next cycle of extreme weather events.

In places like Jacobabad, faced with a multitude of climate disasters, it’s “very difficult to decide where to start from,” he said.

Addressing climate inequality and boosting resilience means a bottom-up approach that involves farmers and the poor in policymaking, Saeed added.

During the heatwaves in Jacobabad, 10-year-old Noor Muhammad endured searing temperatures to attend school, watching as friends fainted in classrooms with no electricity or cold water.

Just months later, he and his family sought shelter in the same building –- repurposed to help flood victims.

“I only want to complete my exams so I can become a police officer.”