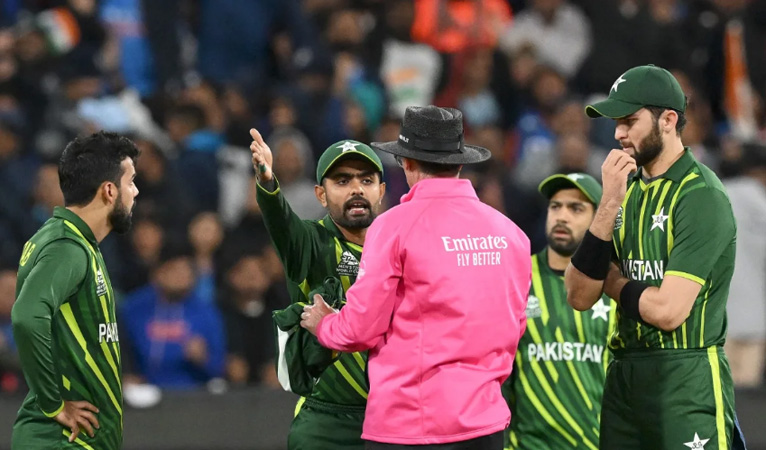 An unbeaten 82 from Virat Kohli led India to a stunning last-ball win over Pakistan to supercharge their bid for a first Twenty20 World Cup crown since 2007 in front of 90,000 fans at the Melbourne Cricket Ground on Sunday. The world number one Indians restricted their fierce rivals to 159-8 and scraped home by four wickets after a remarkable final over, with superstar Kohli the hero.

It looked to be going badly wrong for India as they struggled to just 45-4 off 10 overs, halfway through their chase.

But Kohli and Hardik Pandya (40) launched an incredible fightback with a century stand that left India needing 16 off the final over from a nervous Mohammad Nawaz, who peppered it with wides and no-balls to help them to their target. “It’s a surreal atmosphere, I have no words, no idea how that happened,” said Kohli. “I am really lost for words. Hardik believed we can do it, if we stayed till the end.” Victory was critical in a group that includes South Africa, Bangladesh and qualifiers Zimbabwe and the Netherlands, with only the top two making the semi-finals. India have largely dominated Pakistan since the late 1990s but had lost two of their three previous clashes including by 10 wickets in the group phase at last year’s T20 World Cup and the recent Asia Cup.

But India had been in good recent form, winning home series against Australia and South Africa, riding on the success of their batting line-up. “Those two guys (Kohli and Pandya) are experienced. Staying calm and taking the game deep was very critical. Good for our confidence,” said India skipper Rohit Sharma. “We were in no position to win this,” he admitted.

A deflated Pakistan captain Babar Azam also paid tribute to Kohli. “Our bowlers bowled really well. We had a chance, we tried to stick to our plans. But credit to Virat Kohli.” Few sporting rivalries match the passion of India-Pakistan and the atmosphere was electric as Pakistan got off to a stuttering start after being sent in to bat with captain Babar Azam out lbw for a golden duck to Arshdeep Singh.

Azam reviewed, but it was plumb in front, with Singh’s swing causing more carnage in his next over when Mohammad Rizwan (4) top-edged a rising ball to Bhuvneshwar Kumar at fine leg.

Shan Masood survived a narrow run out appeal as he and Iftikhar Ahmed worked to rebuild the innings. They reached 60-2 at the halfway mark before Ahmed accelerated when the slow bowlers came on, hitting Ravi Ashwin for six then plundering three more in one over from Axar Patel.

Ahmed reached his half-century before Mohammed Shami trapped him lbw, sparking a collapse with Pandya snaring Shadab Khan, Haider Ali and Mohammad Nawaz in the space of 19 runs.

India also had a horror start with KL Rahul out in the first over to Naseem Shah, dragging the ball onto his stumps, then Ahmed took a blinding catch at slip to remove skipper Sharma (4) off Haris Rauf.

That brought Suryakumar Yadav, arguably the best T20 batsman in the world, to the crease but he only lasted eight balls, caught behind for a whirlwind 16 off Rauf as the Pakistan fans roared in celebration. When Patel was run out in the next over, India were reeling at 31-4. Kohli started slowly but finally found his groove and with Pandya launched a fightback, hitting three sixes in one over off Nawaz.

They still needed 60 runs with five overs remaining. With 28 needed off the last eight balls, Kohli smashed two sixes off Haris Rauf to leave 16 from the final over.

In a breathless final over, Kohli hit another six off a no-ball, then ran three byes after being bowled off the free hit that followed and seeing the ball run away to third man.

The chaos left two runs needed off two balls. Dinesh Karthik was then stumped down the leg side as he stumbled out of his ground. Another legside delivery was cleverly left alone by new batter Ashwin to be signalled as a wide. With the scores level and one ball remaining Ashwin calmly lofted the winning run over the off side to spark wild celebrations.