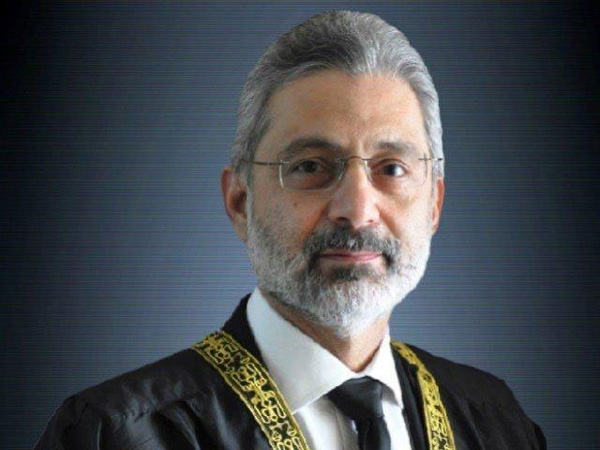 Supreme Court’s (SC) Justice Qazi Faez Isa on Sunday urged Chief Justice of Pakistan (CJP) Umar Ata Bandial to withdraw the names of those junior high court judges, who have already been rejected by the Judicial Commission of Pakistan (JCP), for their elevation to the SC. In his letter to the CJP, Justice Isa asked to “put forward for consideration names of the chief justices of the five high courts or, as proposed by two Hon’ble Members, the chief justices together with the senior-most judges of the five high courts, failing which let this constitute the agenda of the forthcoming meeting.” The letter by the Puisne judge comes just a day after the superior bars strongly objected to the nominations of three junior judges of the high courts regarding their elevation to the apex court. Currently, the top court is short of five judges out of a total strength of 17. The names of judges, who have been recommended for the elevation, include Justice Athar Minallah of the Islamabad High Court, Justice Shahid Waheed of the Lahore High Court and Justice Syed Hasan Azhar Rizvi and Justice Shafi Siddiqui of the Sindh High Court. Since February this year, no SC judge has been appointed. CJP Bandial had summoned a meeting of the JCP on July 28 to consider his five nominees, but a consensus could not be reached among the body’s members. The letter furthered that Justice Bandial also contradicted himself in the note when he stated that the meeting of the “JCP is being resumed on October 24, 2022”.

“The resumption of a meeting, after a period of about three months, is something which is alien to the law and common sense,” said Justice Isa. “In any event, the composition of the JCP has undergone a change since the last meeting. And, how can the meeting of July 28, 2022, be stated to be ‘resumed on October 24, 2022’ with a different agenda?” he questioned, adding that the agenda for the meeting of July 28 was to consider four junior judges and the chief justice of the Peshawar High Court.

“But the agenda of the meeting for October 24 is to consider three junior judges and the Chief Justice of the Islamabad High Court,” he maintained in the letter. Justice Isa also stated that putting forward the names of three junior judges whose nominations have already been rejected “disparages and disrespects the honourable members” and undermines the credibility and integrity of the JCP. Justice Isa furthered that the CJP Bandial didn’t “deign it appropriate to discuss what he was proposing, or even inform him”, despite the fact that he occupies a room next to his.