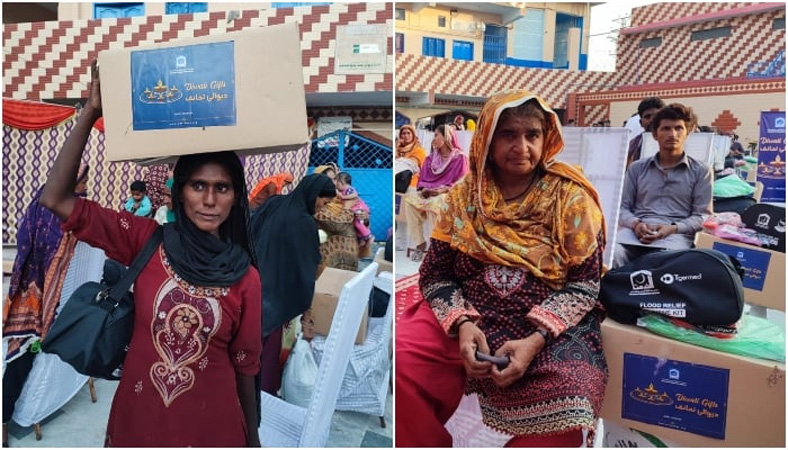 Special events for the distribution of Diwali gifts were simultaneously organised in temples across the province in Sukkur, Kandhkot, Thal, Jacobabad, Mirpur Khas, Umarkot, and Tando Allah Yar. A total of 2,000 food packages, 3,700 pairs of shoes and 2,000 mosquito nets were distributed among the families. Al-Khidmat’s community services program, gifts were distributed among the families in temples across Sindh ahead of Diwali. The organisation also set up a free tuck shop for children and distributed cooked food among attendees.

Addressing the attendees on the occasion, the organisation’s senior vice president Syed Ihsan Ullah Waqas said: “Celebrating happiness is an unalienable right of all human beings. It is very important that we all should actively participate in celebrations of such people who might be deprived of their happiness for any reason whatsoever.” Syed Ihsan Ullah also appreciated Al-Khidmat’s teams who kept their age-old tradition of spreading the joy of sharing and gifting among Hindu communities ahead of the festival. The prior survey was conducted to compile a list of people from the community to ensure dignified gift distribution.

Mentioning the Hindu community’s role, Waqas said that Hindus living in Pakistan are patriotic and play a role in the country’s development of the country. For the establishment of peace in society, it is necessary to discourage religious hatred as much as possible, promoting tolerance, inclusivity and religious harmony, as Syed Ihsan Ullah advocated. “One-third of Pakistan is badly hit by the unprecedented floods, also causing severe crises for Hindu communities across the country,” he said. Syed Ihsan Ullah highlighted that the flood-hit population have been served by the organisation without any discrimination during its rescue and relief activities across the country including FATA and Khyber Pakhtunkhwa.

Emphasising the importance of religious festivities in Pakistan, Syed Ihsan Ullah said that minorities are equal citizens of Pakistan and it is a message for the world. In Pakistan, all communities stand by one another during times of celebrations and sorrows, while such events help promote a sense of safety, security, interfaith solidarity, and positivity in society. “To work together with minorities in a more organised manner to help solve their problems, the organisation has established a special platform namely ‘Al-Khidmat Minority Wing’ which consists of Christian, Hindu, and Sikh communities from all four provinces including Azad Kashmir, merged districts, Gilgit-Baltistan, Karachi, and Islamabad,” he shared.