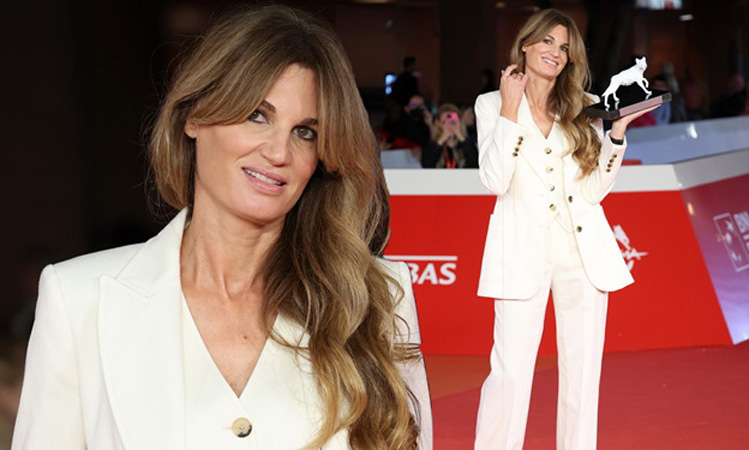 Jemima Khan looked spectacular as she graced the red carpet during the 17th Rome Film Festival at Auditorium Parco Della Musica on Saturday. The screenwriter, 48, was dressed to the nines for the event where her film What’s Love Got To Do With It? – which she wrote and produced – won an award for Best Comedy.

The star also sported a smart pair of trousers while she added inches of height to her frame with a pair of heels.

Meanwhile, Goldsmith announced the news on social media by sharing a picture of her standing on the red carpet of the film festival, holding the award in her hand. The romantic comedy stars Lily James and Dame Emma Thompson and is thought to be inspired by Jemima’s nine-year marriage to Pakistan’s former prime minister and cricket legend Imran Khan, whom she married when she was 21 and he was 42.

The film is directed by Shekhar Kapur, while also producing the film are Nicky Kentish Barnes (About A Boy) alongside Working Title’s Eric Fellner and Tim Bevan.

Last year she hit the headlines when it emerged she was dating The Crown creator Peter Morgan, just four weeks after his split from Gillian Anderson was announced.

But a short while later, Peter did a U-turn and reunited with his partner of four years Gillian, leaving Jemima ‘knocked for six.’

Jemima was married to the prime minister of Pakistan and former cricketer Imran Khan, 69, from 1995 to 2004. The former couple have two adult sons from their nine-year marriage, Sulaiman Isa and Kasim.