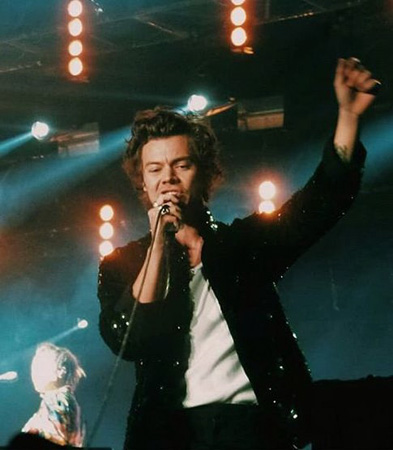 Harry Styles to set new popularity records as he has become the ‘most wanted performer’ to sing at the Brits and Grammys upcoming events. The Watermelon Sugar singer, whose popularity skyrocketed after the release of his third studio album Harry’s House earlier this year, has been tipped off to take home awards from the Grammys and the Brit Awards.

The former One Direction singer is expected to perform at the biggest musical ceremonies as both events are reportedly ‘desperate’ for him to perform. A source from the music industry revealed, “The fact both awards’ shows are desperate for Harry to sing is a massive indicator they don’t expect him to go home empty handed.”

Styles has become one of the bookies’ favorites to win either Best Artist, Album or Single at London’s O2 Arena on February 11.

Sources have also said that Styles is now being tipped to beat 15-time winner Adele and 25-time champ Beyonce.

“But Harry’s US campaign is building momentum and the early talk amongst the Grammy members is that he’s now expected to take home some of the biggest trophies.”

Meanwhile, Styles has won one Grammy – Best Pop Solo Performance in 2021 – and two Brits as a solo artist. A source claimed: “Harry loves to unwind by playing golf. When you’ve got over 60,000 fans screaming your name with every movement it can be overwhelming. “A round of golf is the complete opposite of a stadium show – it’s peaceful and by its nature comes with privacy, so it’s perfect. Harry has made sure to check out as many golf courses as possible as he tours the world. He’s even added golfing clothes to his luggage.”

The 28-year-old star has revealed that he has been hard at work on his next record between shows. Harry said: “I’m always writing.

“I think all of us are so excited to get back to it, which feels insane because we’ve just put an album out.”