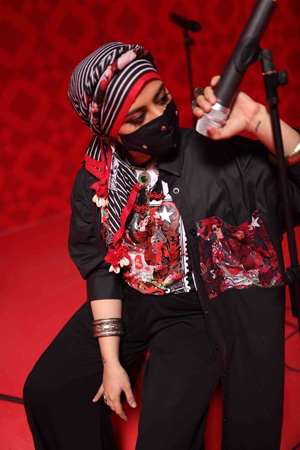 Pakistan’s veiled rapper Eva B, who racked up millions of views, becomes the first Baloch artist to get featured in the prestigious Times Square Billboard. Inspired by ace rappers Eminem and Queen Latifah, the young rapper rose to fame with Coke Studio’s latest season.

Eva is over the moon as she shared a snap of the coveted Billboard featuring her picture.

“Eva B is kind of magical, as the first Baloch artist to be featured at Times Square…Listen to her work along with that of other Pakistani female artists on the #EQUALPakistan,” Spotify wrote on Instagram.

As Eva B becomes the newest face to appear on a digital billboard in Times Square, several celebrities felicitated her for the feat.

In an earlier interview, the hip-hop sensation highlighted the meaning behind her name. “Eva B under the aforementioned pseudonym where Eva is a tribute to the first woman on Earth, Eve, like the latter she too is a first in the female rapping community in the country. The added letter B is a nod to her Baloch identity,” she said.

The rapper started her music career in 2014, and now has collaborated with renowned names of the Pakistani music industry such as Ali Gul Pir, and Anas Baloch.

Her music collaborations include one with Momina Mustehsan at the Lux style awards. Lately, the upbeat motivational game anthem Khel Dil Mein Hai featured her. The song is an audio or visual treat that is alluring and captivates the eye. She has kept her identity hidden under a hijab because it makes her feel anonymous yet empowered.