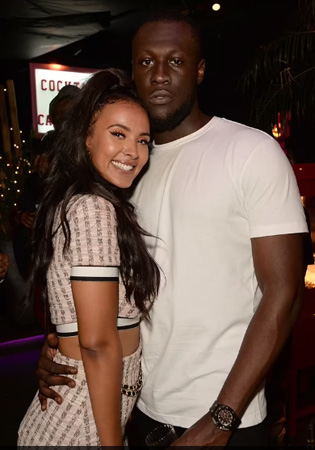 Stormzy, the British singer and songwriter, has opened up on her painful split from his ex-girlfriend Maya Jama as he opened up about their relationship on Friday.

Speaking to Louis Theroux on his new interview series, on Friday the Crown singer 29, admitted to making mistakes during their four-year relationship but revealed he has since grown.

The couple, who split in 2019, have remained friends, despite Stormzy previously confessing to ‘disrespecting’ and being ‘inconsiderate’ towards her.

In exclusive quotes obtained by The Sun, the musician spoke candidly to Louis, 52, and admitted that he had learned some tough lessons following their split.

Stormzy explained: ‘My break-up, that was probably the biggest catalyst for growth as a man. It was like, OK, you made a mistake and you lose someone you loved, someone you cared for, someone who is special to you.

Stormzy went on to hint at the mistake that he made during his four-year relationship with Maya, adding that he never wished to feel that way again.

He added: ‘I didn’t do what a man should do to fully appreciate love, and care for his woman.’

The notoriously private couple dated for four years but in 2019 were said to have ended their relationship in order to focus on their careers.

It’s not the first time that Stormzy has spoken of his relationship with Maya, having declared that he still loves her ‘wholeheartedly’ and wants to marry and have children with his ex-girlfriend in the future.