Terror cases against Imran, 100 others 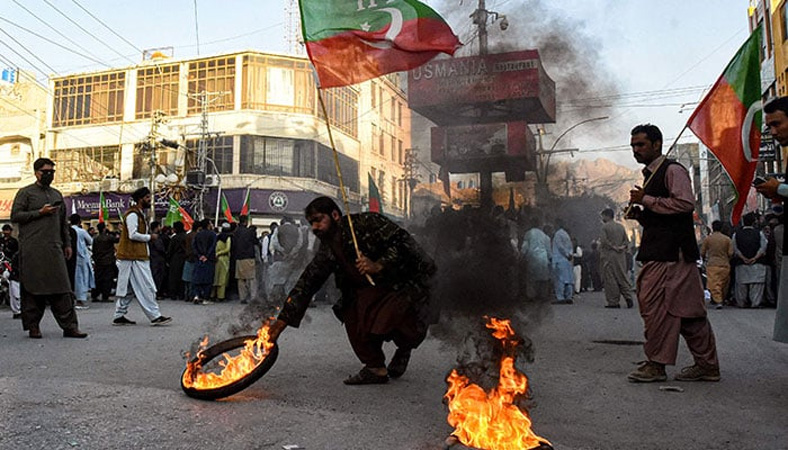 Two terrorism-related cases have been registered against the PTI leadership – including party chairman Imran Khan and secretary-general Asad Umar – and 100 other party workers for alleged violence during the protests. Protests were sparked across the country following the Election Commission of Pakistan’s (ECP) decision to disqualify Khan and ruling that the PTI chairman is no more a member of the National Assembly. The cases were registered at the I-9 Police Station and the Sagjani police station on the federal government and police’s complaints, respectively. Ten offences, including a section of the Anti-Terrorism Act, have been added to the case. The first information report (FIR) registered at the Sagjani Police Station – which includes the name of Khan, Umar, and Ali Nawaz Awan – stated that the workers blocked the Srinagar Highway following the leadership’s orders. It added that the workers pelted stones at the police and vandalised government properties. The complainant has registered the FIR under Sections 109, 147, 149, 186, 188, 341, 353, 427, and 503 of the Pakistan Penal Code (PPC) and Section 7 of the ATA. Before this, another terror case was registered against the local PTI leadership at the I-9 Police Station.

According to the FIR, the PTI workers pelted stones at the police and FC personnel, injuring them. The FIR said that the demonstrators tried to run over policemen with the intention of murdering them. It added that the protesters set fire to trees in Faizabad and its nearby areas and tried to damage government property. The FIR includes Sections 109, 148, 149, 186, 324, 353, 427, and 435, of the PPC and Section 7 of the ATA.