Bowled on ‘no ball’

* PTI chief says no one can 'silence' him; fight for real freedom will continue
* Protests erupt in all major cities following ECP decision
* Ex-PM tells workers to end protests, prepare for long march 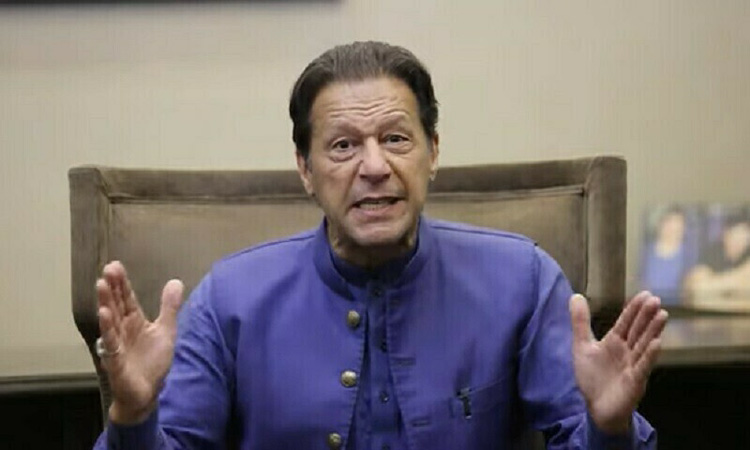 PTI Chairman Imran Khan on Friday lashed out at the ruling coalition for attempting to ‘silence’ him, announcing that he will challenge the decision in a court of law. In a pre-recorded message aired on TV, the PTI chief stated that he had anticipated the verdict, accusing the chief election commissioner of being biased. He claimed that the CEC was the coalition government’s man. “I told everyone last night about the result [disqualification],” Khan said, repeating that he knew about the ECP’s decision beforehand. However, he softened his tone at the end of his address, telling his supporters to call off the protests being staged across the country. Vowing to fight these “thieves” until his last breath, Imran said: “I am asking all protesters to end their demonstrations because people are in difficulty.” At the same time, he urged his supporters to gear up for the party’s long march. “I had said I will hold a long march by the end of the month. I will hold the biggest protest […] My movement for real freedom will continue until supremacy of law is established.” Imran said that Pakistan was at a decisive moment. “Allah wants us to rise against these thieves. We can’t get rid of these thieves until we prepare to struggle against them.” He ended his address by saying that he will give the call for the long march. Informing about his party’s political power show in the upcoming days, the PTI chief said that such a massive jalsa has never ever happened in Pakistan. He criticised Pakistan’s other political parties for reducing themselves to “family parties”. Khan, in his message, also expressed his annoyance at being brought to the same level as PML-N supremo Nawaz Sharif. “Nawaz Sharif is a thief. His children possess big palaces,” he said. 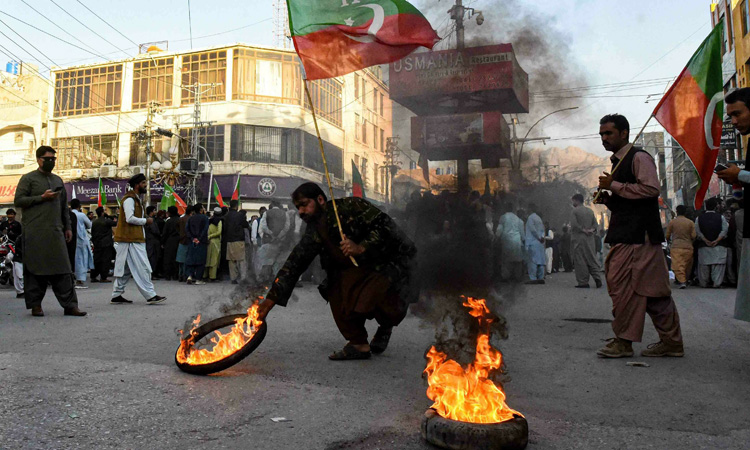 Commenting on the legitimacy of his property, the former prime minister said that he used to play cricket and had bought a flat 34 years ago. “I bought the flat with halal (lawful) money. I sold it and brought the money to Pakistan,” he said. Indicating towards the chaos that has ensued in the current political climate in Pakistan, the PTI chief said: “What happened when East Pakistan was separated from us?” The former PM repeated his claim of the cypher’s presence which, according to him, became the reason for his ouster. Recalling the events of May 25 following his ouster from the PM’s Office, the PTI chief said: “Police assaulted innocent citizens on May 25. Terrorist cases were filed against me.” Khan said that despite his 26 years of struggle for the rule of law, cases were being lodged against him. He also complained about terror cases filed against his party member Shehbaz Gill.The PTI chief accused PPP Co-chairman and former president of Pakistan Asif Zardari and Nawaz Sharif of breaching the Toshakhana law. Comparing PTI’s outreach with that of other political parties in Pakistan, Khan claimed they have shrunk into provincial parties.PTI workers across the country took to the streets in protest after the Election Commission of Pakistan (ECP) disqualified party chief Imran Khan in the Toshakhana reference. Following the ECP’s verdict, party workers flooded the streets in major cities, including Islamabad, Peshawar, Lahore and Karachi.In Islamabad, a large number of PTI workers and supporters converged on Faizabad Interchange where police resorted to tear gas shelling to prevent the protesters from marching towards Islamabad. The workers blocked the main road and set tyres ablaze, suspending traffic on the artery. Meanwhile, Islamabad police said that citizens had the right to protest peacefully but blocking roads and damaging state property was against the law.”The governments of other provinces are requested to stop the movement of illegal protests headed for the federal capital,” police said, adding that tear gas was being used in Faizabad in light of the situation.Police also appealed to elders, women, and children to avoid unnecessary travel. “Citizens are requested to keep routes leading to hospitals open,” police added.In Karachi, the PTI workers gathered outside the party’s office located on Sharea Faisal. A police contingent also reached the scene in order to pre-empt any untoward situation. Traffic on the thoroughfare was disrupted as the number of protesters began to grow. Police also deployed water canons in light of the looming threat of violence. Visuals shared by the party’s official Twitter account showed Ali Haider Zaidi and other leaders taking part in what it dubbed a “peaceful protest”.Meanwhile, Karachi Administrator Murtaza Wahab said the PTI’s protest against the ECP verdict was “beyond comprehension”. In a statement, he said the PTI must accept the electoral watchdog’s decision.Visuals shared by the party’s official Twitter account showed Khyber Pakhtunkhwa minister Taimur Khan Jhagra leading a protest in Peshawar. Another video of Rahim Yar Khan showed workers blocking a road and burning tyres. Another showed a large number of protesters gathered in Mardan.