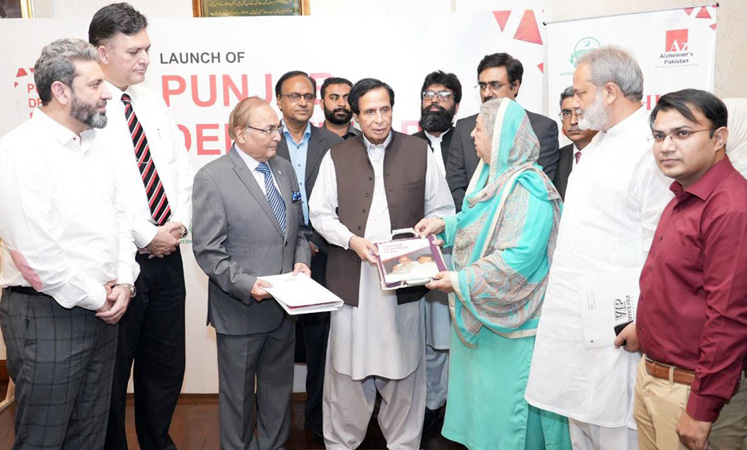 The CM noted that international data about this disease is alarming. Dementia disease is also spreading in the country but elderly persons could not feel it. With increasing age, memory goes away due to dementia. Society should fulfill the responsibility to treat elderly people suffering from this disease and Punjab is the first province where a dementia plan has been introduced with the support of WHO, he said. He said that, currently, there are about four lakh dementia patients in Pakistan and the number is increasing day by day. The worrying thing is that 90% of dementia patients are not diagnosed, he added. A dementia patient becomes a liability, not only for the family but also for society. The Punjab government has become a part of this plan and it’s an example for other provinces to follow; the CM maintained and added that dementia has not only become a global issue but it is also a concern for us at the national level. Parvez Elahi observed that adequate measures are needed to treat dementia so that the patient and his family could be supported, he said. Health Minister Dr Yasmin Rashid, President of Alzheimer Pakistan Zia H. Rizvi, secretary general Dr Hussain Jafri and others were also present.

The government of Shehbaz Sharif has withheld this amount. Punjab is Imran Khan’s own province. We support Imran Khan’s long march. Shehbaz Sharif is taking revenge from Punjab because Imran Khan and our government are here, added Parvez Elahi. The federal government is responsible for this situation. It is the fault of Shehbaz Sharif’s government to create this situation. If the federal government had delivered and solved the problems of the people, this situation would not have happened, he stressed. The federal government could also be treated and they would be given medicine for free, he added. On the issue of wheat, the provincial government would approach the Supreme Court, he said. N-League and PDM are unnerved because they are unable to handle themselves. They dream of ruling Punjab but cannot manage themselves. The N-League government is responsible for the bad economic conditions, he said. We want to hold local bodies elections in the province. The local government bill will be passed in the assembly today. We have already passed the local government bill in the assembly but the N-League’s Governor did not sign it. The end of the PDM alliance is dangerous and the next month is very important. Imran Khan is talking about the general elections very calmly and respectfully but the opponents do not deserve any respect or honour, he concluded.

Meanwhile, a meeting of MNAs and MPAs of Rawalpindi Division was held under the chair of Chief Minister Punjab Chaudhry Parvez Elahi at his office to discuss suggestions about the resolution of people’s problems and the constituency-related developmental schemes.

The CM ordered that the recruitment process should be started soon to functionalise Rawalpindi Urology Institute and wardens be deputed to resolve traffic problems. Alongside this, he added that Rescue 1122 centres should be established on main roads and in remote areas to facilitate the needy. Similarly, hospitals and educational projects should be completed on a priority basis; he stressed and asked the deputy commissioners to visit the hospitals and monitor the supply of free medicines. The vacant teachers’ posts should be filled under the school-based policy, he added. Besides the installation of tube wells, construction of the Dadocha Dam should also be started soon to supply water in Rawalpindi and other districts, he said and further directed to ensure the supply of items to the prisoners in the jails at discounted rates.