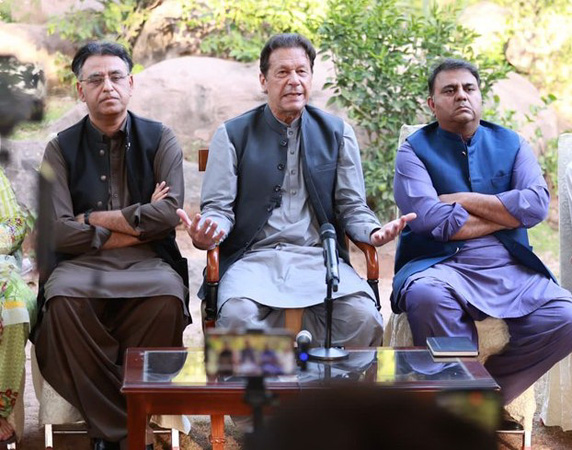 PTI Chairman Imran Khan Monday said he was giving ‘some more time’ to the government to announce date of next general elections, but warned that he would not delay his long march beyond October. “My march will be held in October if the government does not announce the date for the next general election,” Imran Khan told a press conference. warning the government that multitudes of people will take to the streets responding to his call for the anti-government march. “I am giving them (government) time just for the sake of the country,” he said. “I repeat that they still have time to announce elections, and if they don’t, I will begin my march, and my preparations are almost complete,” he added. Imran accused his political rival and PML-N supremo Nawaz Sharif of attempting to delay elections, saying “he (Sharif) is afraid to go to polls because of the PTI’s constantly growing popularity.” He said Nawaz was waiting for the PTI’s wave of support to diminish before elections could be held. He also ruled out the possibility of dialogue with the government, saying “this is very hard to do as you can talk to Baloch and Sindhi nationalists, but not with criminals.” Imran Khan said a high-profile appointment like that of the army chief should not be made by ‘criminals like Nawaz or Zardari’. “The army chief should be appointed on merit,” he added.

The PTI chief claimed that the recent audio leaks proved that the Election Commission of Pakistan (ECP) was in cahoots with Pakistan Muslim League-N (PML-N) to plan these elections. “The audio leaks have also proven that the chief election commissioner Sikandar Sultan is a key player of PML-N.” However, he added, through the public’s unwavering support, his party was able to defeat their combined candidates. “ECP and PML-N had planned to schedule these by-polls in constituencies where they thought their combined vote bank was double the size of PTI’s,” he said. Imran said that despite the hurdles that were created by rescheduling the elections, they were able to defeat the combined candidates.

Touching upon the National Assembly seat the party lost in Karachi’s Malir district, Imran accused the PPP of rigging the election. “I have complete evidence of PPP rigging the elections like they always do in Sindh,” he said. Imran demanded the Election Commission of Pakistan (ECP) to hold a re-election in Karachi’s NA-237 constituency, claiming that the PPP clinched the seat in the by-poll on Sunday through “rigging”. Imran said his party had “all the evidence” that the PPP openly indulged in rigging. “I also want to highlight that the Sindh election commissioner is on the provincial government’s payroll and we have already approached the judicial council against him,” he told journalists. He went on to claim that the election commissioner was on the payroll of the Sindh government, an issue for which they had already approached the Supreme Judicial Council, but the ‘case was not being heard’. The PTI chief went on to term the by-polls a ‘public referendum’, saying the nation wants “immediate elections as it has rejected this imported government”. Imran said his party had a detailed discussion about the ‘custodial torture’ inflicted on PTI leaders, saying that Senator Azam Swati was stripped naked in custody and tortured – the same treatment that was allegedly given to Shahbaz Gill. “I felt so ashamed that we humiliate our people this way.” The PTI chief questioned the logic behind torturing a “75-year-old senator” over a “mere tweet”. “He (Swati) was beaten in front of his grandkids and then was taken to police station where law enforcers handed his custody to agencies, who then subjected him to more torture,” he said, adding that the incident brought disrepute to Pakistan, and created an impression as if “the army is out of control and could do anything.”