AbRam gets medal from Shah Rukh Khan at Taekwondo match 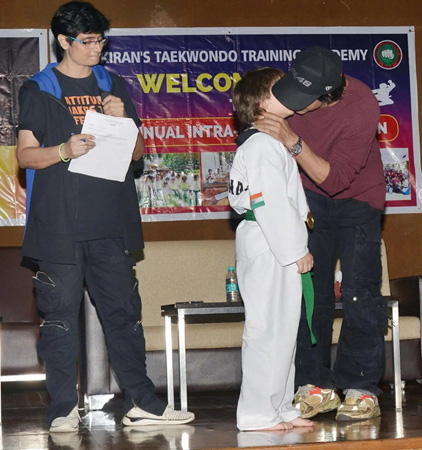 Shah Rukh Khan and Kareena Kapoor cheered for their kids AbRam and Taimur, respectively, at a Taekwondo event. Shah Rukh Khan was a proud dad on Sunday after his youngest son AbRam won a Taekwondo match. The actor and his entire family came together to cheer for AbRam at the competition, which was joined by other celebrity parents and their kids as well. Shah Rukh attended the ceremony in a maroon shirt and black pants and wore a black cap. After AbRam won the match against his opponent, Shah Rukh was called on stage to give away the golden medal to his son. After receiving the medal, AbRam gave his dad a sweet kiss. Also seen at the ceremony were Shah Rukh’s other two kids, Aryan and Suhana Khan. Both of them posed with the Taekwondo trainer, who taught them when they were kids as well.