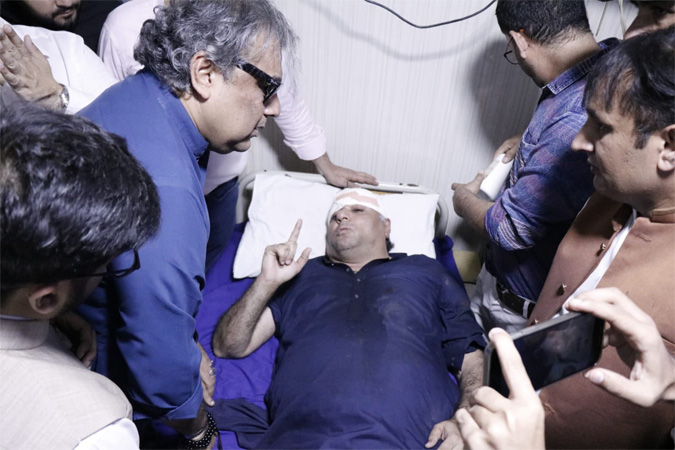 Clashes among the supporters of rival political parties and claims of rigging in different constituencies during the by-elections marred the entire process on Sunday. Polling for by-elections on eight National Assembly and three Punjab Assembly seats was held on Sunday. In the polling station of the Municipal Girls Intercollege in Peshawar, there was a bitter exchange between Pakistan Tehreek-e-Insaf (PTI) MPA Asif Khan and Awami National Party (ANP) workers. The ANP workers got angry on the arrival of PTI MPA at the polling station.

The workers raised slogans against the MPA and there was a bitter exchange between them. The police kicked out the supporters of both the parties. The polling process was halted for a while but it was resumed after the intervention of the police. On the other hand, there was a clash between PTI female supporters and the police at the polling stations 18 and 20 of the American Mission Primary School for Women in Faisalabad’s Model Town area. The PTI women alleged that the policemen were misbehaving with them, adding that the policemen snatched their mobile phones and were not allowing them to cast votes.

As the NA-31 results started pouring in, PTI party workers at a sub-election camp in Peshawar began premature celebrations and allegedly opened aerial firing. A police team arrived at the scene and attempted to make arrests, leading to clashes with PTI workers. Five persons, including a six-year-old girl, sustained bullet injuries in a dispute between supporters of political parties near Fatima Jinnah Colony Vehari road during by-election in NA-157, Multan. According to Rescue 1122 sources, supporters of two political parties started a fight during the polling process of the by-election in NA-157 which resulted into firing later. As a result of the firing, five persons including Sabirs (60), Sawera (6), Ashraf (45),Asghar Ali (50) and Sadiq (60) sustained bullet injuries. The rescue officials reached the spot and shifted the injured to Nisthar Hospital. Police concerned have started the investigations into the incident.

In another incident, a person was arrested for urging people to vote and using a mobile phone at Polling Station No. 72 in Multan. The presiding officer handed over the unrelated person to the police. The said person was arrested from the women’s polling station. Meanwhile, the Code of Conduct of the Election Commission was violated in NA-108 constituency of Faisalabad. Mobile phones were being used at polling booths during by-elections. The pictures of the voter casting their vote for their favorite candidate are surfing over social media, as people could be seen sharing pictures of marked ballot paper. The situation was tense in Karachi also where the PTI and PPP traded barbs as they blamed each other for rigging during the by-elections on two seats.

PTI’s Ali Haider alleged that PPP leaders were in breach of the electoral commission’s regulations as they apparently roamed around polling stations with armed private guards. The claims were soon followed by video footage of PTI Karachi President Bilal Ahmed Ghaffar which was posted by another party leader and former federal minister Maritime Affairs Ali Haider Zaidi.

Ghaffar can be heard saying that PPP workers “threw him to the floor” before 10 to 15 people hit him with bricks. “Saleem Baloch MPA was the first one who attacked me,” he said alleging that police “did not respond” as the attack took place. The claims were also endorsed by PTI Sindh’s spokesperson Arsalan Taj who said that “Hakeem Baloch’s son” was behind the alleged attack. Meanwhile, senior party leaders Fawad Chaudhry and Asad Umer also criticised the PPP for attempting to rig the polls as they condemned the attack. On the other hand, PPP’s Danial Khokhar claimed that the attack had in fact been instigated by Ghaffar and an aggressive “group” of PTI workers which had also left Khokhar injured.