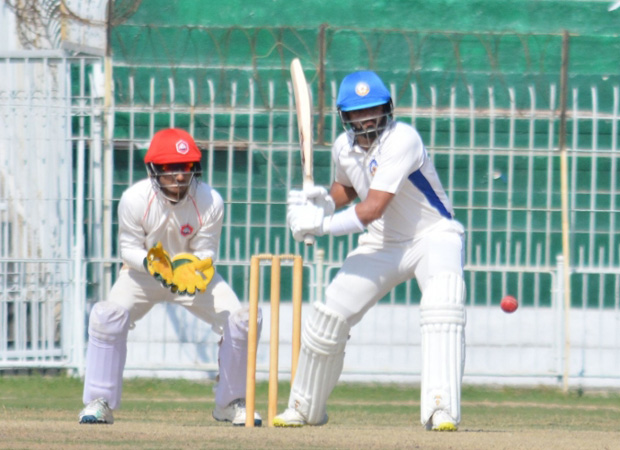 LAHORE: Azhar Ali stroked his 45th first-class century as Central Punjab justified their decision of batting first against Northern by reaching 300 for three at stumps on day one of the Quaid-e-Azam Trophy fourth round fixture at Iqbal Stadium in Faisalabad on Saturday. The 37-year-old veteran of 95 Tests was batting on 130 and with him was Tayyab Tahir on 82 as the two batters have put on 168 runs for the unfinished fourth wicket. The two had joined hands after Nauman Ali had picked up two of the three wickets to reduce Central Punjab to 132 for three. Azhar Ali’s 209-ball innings includes 15 fours and four sixes, while Tayyab has struck six fours and four sixes in a 130-ball knock. Abid Ali (11), Abdullah Shafique (32) and Mohammad Saad (27) were the batters to return back to the pavilion.

Sindh and Southern Punjab let Khyber Pakhtunkhwa and Balochistan off the hook, respectively in the other two matches. At the Pindi Cricket Stadium in a match that is being live-streamed, Sindh’s decision to field first appeared to be spot-on after Khyber Pakhtunkhwa had slipped to 128-5 after being 111 for two. However, Kamran Ghulam and Mohammad Sarwar Afridi rescued their side from complete collapse by stitching an unfinished 163-run sixth wicket partnership to take their side to 291 for five at stumps. Kamran Ghulam was batting on 89, an innings that has come from 186 balls and includes nine fours and two sixes, while Sarwar’s 118-ball 79 contains 11 fours and two sixes.

Earlier, Sahibzada Farhan (53) and Rehan Afridi (47) had added 98 runs for the third wicket to lift the defending championship to 111 for two after Sindh fast bowler Mir Hamza had removed both the openers with the scoreboard reading 13. Fast bowler Mohammad Umar, in the second session, picked up two wickets after Arbab Ahmed had ended the third wicket partnership by accounting for Rehan. The story was not too different at the Abbottabad Cricket Stadium where Balochistan recovered from 102 for three to finish the day at 225 for four in 83 overs against ATF Southern Punjab. Former Test batter Asad Shafiq saved his side’s blushes when he returned undefeated on 70 from 111 balls with 10 fours.

Asad added 112 runs for the fourth wicket with Haris Sohail, who contributed 37, after openers Ali Waqas (45) and Imran Butt (30) had provided Balochistan a 73-run start before they lost three wickets for 29 runs. For Southern Punjab, Mohammad Imran Randhawa has bagged two wickets for 34 runs.

Quaid-e-Azam Trophy (fourth round, day one):

4: Toss — Central Punjab won the toss and elected to bat first vs Northern at the Iqbal Stadium, Faisalabad