* Lead actor Yasir Hussain shared a poster for 'Javed Iqbal 2' on his Instagram on Thursday and wrote, 'Forget one, wait for this one' 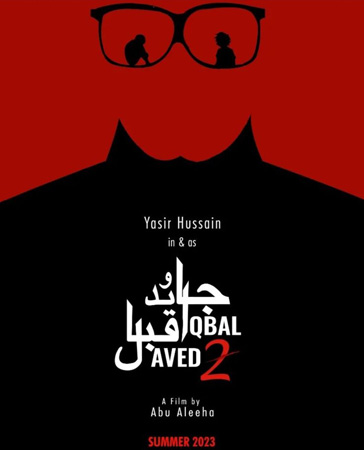 Javed Iqbal: The Untold Story of a Serial Killer may have met with road blocks in its journey when it was banned in Pakistan but that didn’t stop it from taking off.

The film was appreciated internationally and is now gearing up for a sequel.

Lead actor Yasir Hussain shared a poster for Javed Iqbal 2 on his Instagram on Thursday and wrote, “Forget one, wait for this one.” He added that the “full story” is “coming soon”.

Director Abu Aleeha informed journalists that Javed Iqbal 2 is not for Pakistani cinema. “We are creating it for an international OTT platform. Everything has been decided, we are not disclosing anything. Yasir Hussain will play the lead character. This film will premiere at international festivals next year and then will be available to stream on the OTT. We will not even go near Pakistani cinema or the offices of the censor board this time, we have understood their blackmailing tactics.”

He also explained how the two parts differ from one another and the upcoming one will be bigger and better than before. “Secondly, Javed Iqbal one was a low-budgeted, limited story about the investigation of Javed Iqbal, the serial killer. We had left a lot of questions that we will answer in part two such as who the gang really was, who was involved in it, etc. My book Javed Iqbal 2 is also available in the market so now we are turning it into a film. It will be shot in Lahore, its cast, production design and budget will be bigger than the first film. The canvas of the story, this time, is very broad.”

He had shared his plans for a sequel with Images in an earlier conversation. Along with saying he is going to pitch the uncensored version of the film to multiple OTT platforms, he confirmed that after its release online, he will be working on the sequel which will be “more brutal than part 1” of the film.

Javed Iqbal was originally supposed to be released in October last year, but the premiere was pushed to December 24 because it was still being cleared by the censor boards. December proved to be unlucky as well – the film’s release experienced yet another delay due to a rise in Covid-19 cases. The release date was then rescheduled to January 28.

With the new date announced, the film had its Karachi premiere at Nueplex Cinema on January 25, attended by the cast and crew as well as other members of the entertainment fraternity. The very next day, the director took to Twitter and shared that the Punjab government had put a halt to the film hitting cinemas. Javed Iqbal had a world premiere at the UK film festival and got selected for the Berlin International Art Film Festival as well. The film is based on the investigation into Javed Iqbal, the serial killer who killed 100 young boys in Lahore and sent evidence of his crimes to the authorities and media in 1999.