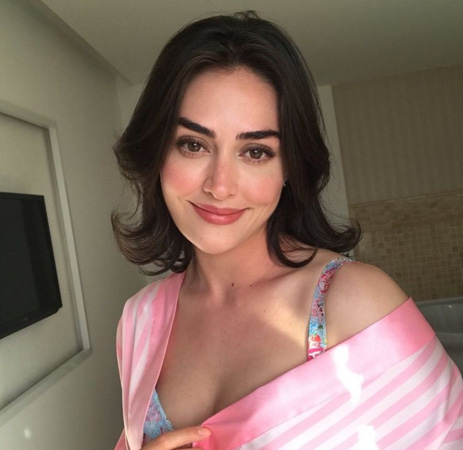 Turkish beauty Esra Bilgiç aka Halime Hatun’s latest social media post is proof of her beauty, elegance and fashionista persona. The Ramo star has surely gained much admiration in Pakistan since the super-hit Turkish television series Dirilis: Ertugrul was aired.

This time around, Esra took to her social media handle and raised awareness for breast cancer as she partnered with Victoria’s Secret Turkiye to help women battle the disease. ‘During Breast Cancer Awareness Month, @kadinkanserleri has implemented a very valuable project with the association @victoriassecretturkiye With every bra you buy from Victoria’s Secret during the month of October, you’ll help 200 women in need receive mammograms. ???? I love you so much! #victoriassecret’, the beauty captioned her post in Turkish.

Esra became a household name in Pakistan after former PM Imran Khan directed the authorities to have the drama series Dirilis: Ertugrul dubbed in Urdu and telecast in Pakistan. On the work front, Esra was last seen in the drama serial Kanunsuz Topraklar also featuring co-star U?ur Güne?. The drama premiered on September 29, 2021.