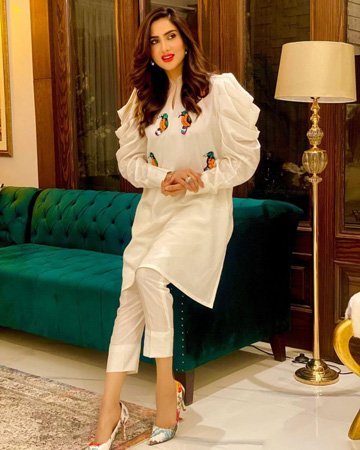 Fiza Ali recently put on her singing hat back and mesmerised social users with her covers of classic hits. In one of the videos posted on the photo and video sharing application on Thursday, ‘Eidi Sab Ke Liye’ host croons a soulful number ‘Sun Saathiya’ from the Bollywood movie ‘ABCD 2’ – starring Varun Dhawan and Shraddha Kapoor.

Ali aced the soulful verses of the track with her melodious voice. For the second video of the singing series, the celebrity picked on the all-time classic ‘Mere Mehboob Qayamat Hogi’ by legendary singer Kishore Kumar from his 1964 movie ‘Mr. X in Bombay’.

The videos went viral on across social media platforms and were watched by thousands of netizens. In addition to numerous likes for the celeb, the clips also gained her praise from fans in the digital world.

Fiza Ali is quite active on her social media handles and enjoys a huge following of at least a million Instagrammers. She often shares glimpses of both her personal and professional lives on social apps.

The celebrity is often seen spending time with her only daughter, Faraal, and also shares pictures from their day outs.