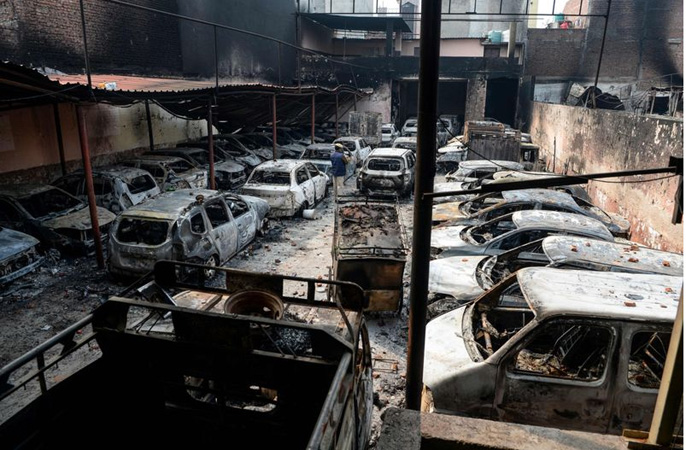 A citizens committee comprising Indian judges, in its report on the 2020 Delhi riots, has flagged the failures of Indian state machinery, indicted the BJP leadership for provoking anti-Muslim sentiments during electioneering, and condemned media for vilifying Muslims. The report, titled ‘Uncertain Justice: A Citizens Committee Report on the North East Delhi Violence 2020′ was authored by the committee chaired by Justice Madan B. Lokur, former Judge of the Supreme Court.

The report delved into the factors which led to the killing of 53 people after the Hindu fanatics attacked on the protestors who were demanding the repeal of Citizenship (Amendment) Act, 2019 (CAA), passed by the Indian parliament.

“The Muslim community was grappling with deep fears of loss of citizenship, stemming from the combined effect of the Citizenship (Amendment) Act, 2019 (CAA), passed in December 2019, with potential exclusion through the National Register of Citizens process,” the report said.

The report relied on legal documents including FIRs, charge sheets, and orders passed by courts. The committee highlighted the “state failures”, including those of the Delhi Police, the Ministry of Home Affairs and the Delhi government, as well as the irresponsible role played by the Indian media. “Speeches, statements and slogans by BJP functionaries, prominently Kapil Mishra and Anurag Thakur, characterised the protesters as traitors, enemies, and violent troublemakers, within a divisive Hindu-Muslim binary,” the report stated.

The committee also noted the specific targeting of anti-CAA protest sites, including at Chand Bagh, Kardampuri, Jaffrabad, Mustafabad and Khajuri Khas. “Calls for violence against the so-called “traitors”, in the form of the “goli maaro” (Shoot the traitors) slogan, were casually repeated, with no censure. The vilification of the protests and anti-Muslim hate was amplified by widely viewed television news channels and social media,” the report found.

In 171-page report, the judges’ committee observed that Delhi Police failed to prevent the violence even though there were enough warning signs since January 2020 indicating a tense build-up. “There were also instances of police complicity of varying degrees,” the report said. The committee also found that the Aam Aadmi Party (AAP) government in Delhi did “precious little during this entire time to mediate between the communities, even with the warning signs”.

While mobs clashed and caused damage to each other, Muslim identity, ranging from individuals to homes, businesses, and places of worship, was targeted. This grim mix of targeted, as well as generalized violence, resulted in the death of 40 Muslims and 13 Hindus, the report said. It also highlighted the targeted application of the Unlawful Activities (Prevention) Act (UAPA), an anti-terror legislation, into one of the FIRs connected with the riots, severely restricting the avenues of the accused to get bail during the course of the trial.

“This Committee has carefully considered whether the criminal actions alleged in the first chargesheet filed in FIR 59 qualify as “terrorist” acts (see Chapter 8) and found no material in it substantiating the allegation that the “unity, integrity, security, economic security, or sovereignty of India” was threatened.” The report condemned news media for mirroring the politicians’ hate narrative directed at anti-CAA protesters and Muslims. It said that the social media platforms were widely used to propagate divisive Hindu-Muslim narratives and calls for violence.

The analysis of top six most viewed Indian television news channels by the committee reveled reportage of events surrounding the CAA framed the issues as “Hindus versus Muslims” with prejudice and suspicion against the Muslim community. “These channels concentrated on vilifying anti-CAA protests, fanning unsubstantiated conspiracy theories, and calling for their forcible shutdown,” the report added. The committee recommended that a Commission of Inquiry ought to be set up for an impartial inquiry to establish the whole gamut of factors pertaining to the North East Delhi violence.