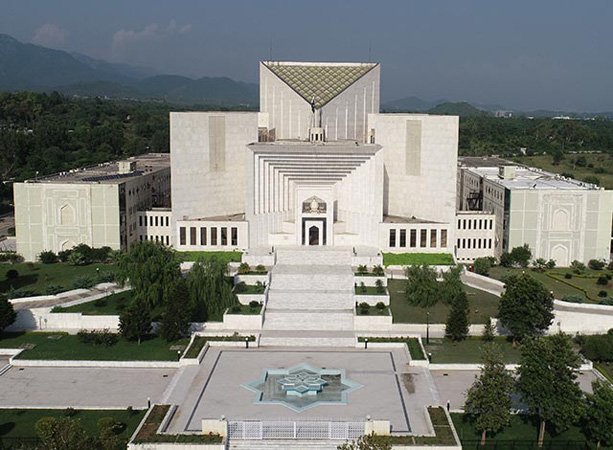 The Supreme Court on Friday issued a written order regarding the interpretation of Article 63-A of the Constitution with regard to the counting of the vote of a dissident member against the party policy in the House of Parliament. A 95-page majority judgment issued by the top court said a dissident member’s vote cast against his party guidelines would not be counted, however, the period of disqualification of a dissident member should be determined by the Parliament. It further said the Constitution had mentioned the parliamentary party for the instructions, not the party head. “The members of Parliament have complete freedom of expression but this could not be demonstrated at the time of exercising the vote in the light of Article 63-A.” The majority judgment rejected the objections raised on the admissibility of the presidential reference, saying the court had already given answers to the objections in another case. The decision said that if the prime minister or chief minister lost confidence in the parliamentary party then he had to face a vote of no-confidence.

A member voting against party directives was destructive to the parliamentary democratic system, the apex court added. The right of assembly members to express their opinion had also been protected in the lawyers’ front case, the verdict said. Members of the Assembly could discuss, agree or disagree within the party on the issue of vote, however, when “it comes to the voting, the situation would be different”. The judgment said the parliamentary party’s instructions had to be followed while voting under Article 63A. It was argued that not counting the dissident member’s vote would give rise to authoritarianism in the parliamentary party but “we didn’t agree with the argument”.

Counting votes cast against party policy was a threat to the democratic system, it added. Chief Justice of Pakistan Umar Ata Bandial, Justice Ijaz ul Ahsan and Justice Munib Akhtar had decided not to count the vote of the defiant member, while Justice Mazhar Alam Miankhel and Justice Jamal Khan Mandokhail had contradicted with the majority decision..

Commenting on the verdict, Advocate Supreme Court and a renowned constitutional expert Hafiz Ahsaan Ahmad Khokhar said that first time Supreme Court in detail has legally opined on various provisions of Constitution Article 63A, Article 91(7) and Article 95 with reference to defection by holding that defection is an attack on the integrity and cohesion not only on the political parties, but represented in an acute form of unconstitutional and unlawful assaults, encroachments and erosions which constituting a direct negation and denial of the rights encompassed in Article 17(2) of Constitution.

He said that Supreme Court has also clarified that the decision with reference to Article 63A of Constitution would be of by the Parliamentary Party and not by Party Head and the Parliamentary Party cannot delegate, transfer, assign or in any manner “outsource” the power conferred on it to anyone, including to the Party Head, and defection if made, Article 63(1)(p) of Constitution simultaneously confers the necessary competence on Parliament and that matter has been left by the Supreme Court to the legislature to suggest the magnitude of punishment to defectors.

He said the present judgment of Supreme Court would have long lasting effect on parliamentary system of Pakistan and would close all doors of defection in Assemblies, and would promote the stability in our political system, which is based on Parliamentary form of government, by also simultaneously giving the power to members of a majority of a Parliamentary Party to decide in any situation confronted as prescribed in Article 63A of Constitution. According to Constitutional expert that the present judgment has empowered the majority in members of a Parliamentary Party which would try to control the unbridled authority of a Party Head as well in future with reference to application of Article 63A of Constitution and has tried to thwart and defeat this menace in political and parliamentary culture of Pakistan.