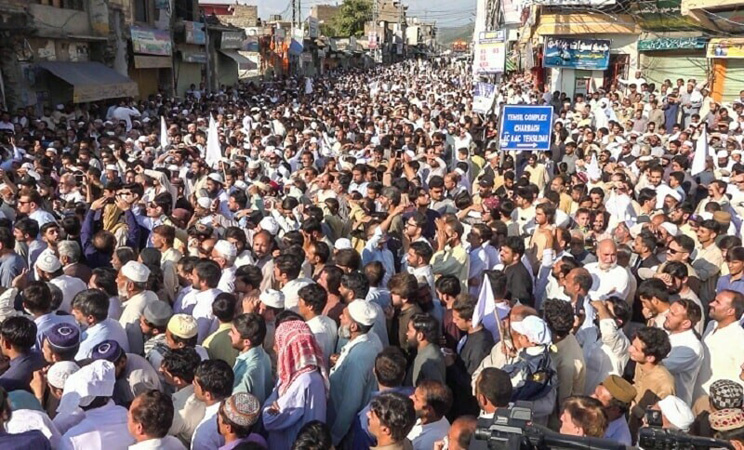 The locals of Swat’s Charbagh tehsil once again took to streets on Friday in continuation of their series of protests against the spate of terrorism in the scenic valley, demanding authorities clamp down on elements ruining the peace in the area, a private TV channel reported.

The protest was organised by a local organisation, Swat Qaumi Jirga, while elders, youth, and children from different parts of Charbagh tehsil took part in the demonstration, carrying placards inscribed with slogans seeking the restoration of peace in the valley.

It was the eighth protest rally on Friday by the locals since the resurfacing of the terror activities in the month of August. Adviser to Prime Minister on Political and Public Affairs, Amir Muqam, also turned up at the protest to express solidarity with the demonstrators, while ANP district head Ayoub Asharey, PkMAP leader Mukhtiar Yousafzai, Charbagh elder Naveed Iqbal, Attaullah Jan and other peace activists were also in attendance. The speakers were of the view that their demonstrations will continue until the elimination of the last terrorist from the valley. In his remarks, Muqam said: “The PML-N will never compromise on peace in Swat.” We are against all forms of terrorism and we are standing with the people of Swat for peace, he added. “I must underline that the people of Swat are not alone and the leadership as well as every worker of the PML-N in the entire country is standing with them,” he told the protesters.

Another speaker, Mukhtiar Yousafzai, said the locals have decided they would not breathe freely until terrorism was completely eliminated from Swat. “Gone are the days when the people of Swat were made to suffer through an organised pattern of terrorism. This time we have resolved to eradicate this menace once and for all,” said Yousafzai in his address. Many participants were accompanied by their children carrying flags and placards demanding peace from the state. The speakers said that the people of Swat had extended unprecedented sacrifices and were even displaced for peace’s sake. “We are also the citizens of this country, and we have equal rights but unfortunately we are being treated as foster children of the state,” said Advocate Attaullah Jan in his address. The leaders of the Swat Quami Jirga said more protests would be organised in every part of Swat until durable and complete peace was restored in the valley. A similar protest took place in the Alpuri area of Shangla.