* Imran says whoever gives NRO to thieves is a 'traitor'
* Institutions should be 'embarrassed' by their actions
* Federal government, agencies responsible for rising incidents of terrorism in Swat 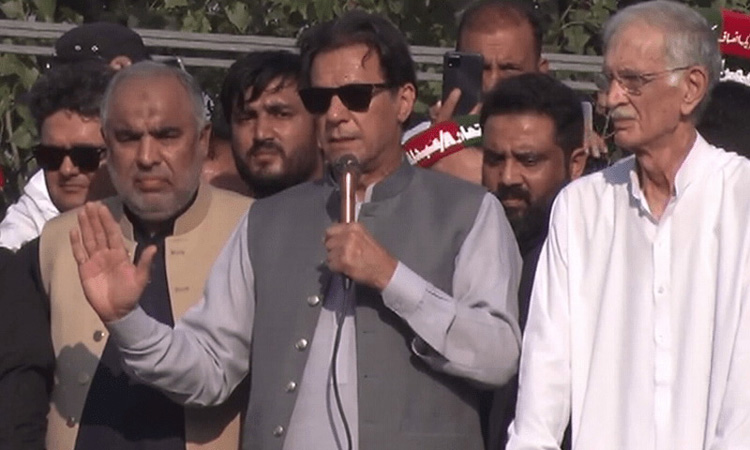 Former prime minister and PTI Chairman Imran Khan has said that going to jail is not a big deal for him to achieve ‘real freedom’ in the country, adding that he is even ready to “sacrifice his life”.

Addressing students at an Agriculture University in Rawalpindi, the former premier called upon the pupils to take to the streets in order to stand up against injustice, saying that “chains have to be broken. Freedom is not given, it is taken”. “Raising a voice against injustice is Jihad. If someone wants to rob the country, I have to stand up to these thieves,” he added.

Later addressing a rally in Mardan, PTI Chairman Imran Khan said that whoever gives an NRO to “thieves” – the incumbent rulers – is a “traitor” as he lashed out at institutions for allegedly torturing his party’s leaders. “All thieves are being released; Shehbaz Sharif and his son have been acquitted. Whoever they are, they should be ashamed. You are a traitor who is betraying their country,” Khan said.

Khan called out the people who were having cases registered against him and said that he would “not back down”. The PTI chairman also chided the institutions, blaming them for torturing his chief of staff Shahbaz Gill and party leader Azam Swati. “If you think that you will be respected by torturing people, then you are mistaken,” Khan said while berating the institutions. He asked them to be “embarrassed” by their actions.

In an apparent reference to the institutions, the PTI chairman said that God hasn’t given the luxury to remain “neutral” when it comes to deciding between the right and wrong paths. “Ask your children about Nawaz Sharif and Asif Zardari. These two families have looted the country for the last 30 years,” the PTI chairman said.

Slamming PML-N supremo Nawaz, Khan asked that since he has been seeking bail every now and then as several cases are being lodged against him, should he also leave the country. “Had Imran Khan been a corrupt person like Nawaz Sharif, he would have left the country the first chance he got,” Khan said, adding that the PML-N leaders have four “huge palaces in London”.

Khan alleged that Nawaz and company are in politics to misuse their powers and that after coming into power, the PML-N supremo set up 17 factories. “On the contrary, look at my record. I haven’t misused my power even once during my tenure of 3.5 years,” he said. Imran Khan appeared to hold the federal government and agencies responsible for rising incidents of terrorism in Swat.

Addressing a workers’ convention in Charsadda, he said that terrorism had started rising since the incumbent government came into power. “Look at what is happening in Swat,” Imran said. He alleged that instead of fulfilling its responsibility of controlling “terrorists coming from the borders”, the federal government was busy securing acquittals in cases against its members, indulging in corruption and creating political cases against opponents.

“What are the agencies doing? Telephone [calls], threats from unknown members and silencing the media to not show Imran Khan on TV. There is no law remaining in the country. There is terrorism again in Swat despite the sacrifices of its people. “They (government and the agencies) are responsible for this [rise in terrorism],” the former premier claimed.

Imran called on the people to vote for the PTI in the upcoming by-poll and ensure its victory.