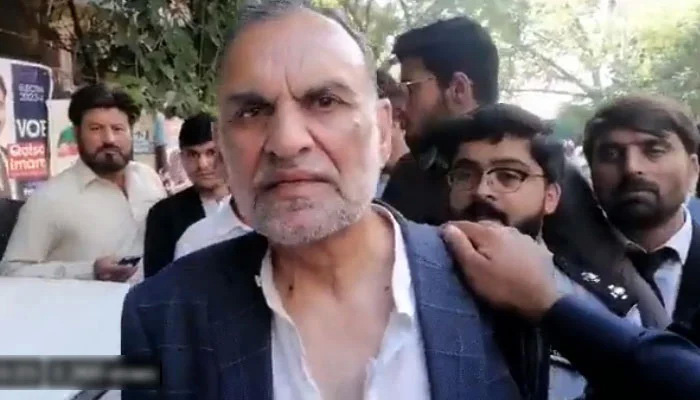 The Federal Investigation Agency (FIA) on Thursday arrested Senator Azam Khan Swati over his controversial tweets against the army leadership. Swati was presented in court of senior civil judge Shabbir Bhatti soon after his arrest. At the outset of the court proceeding, the FIA officials requested the court to grant a seven-day physical remand of Swati for investigation. However, Swati’s counsel claimed that the “worst” torture was inflicted upon the senator. They stressed that Swati has been arrested only on “political grounds”. The court later granted his two-day physical remand. Swati’s tweet named the army chief, and came after Prime Minister Shehbaz Sharif and Hamza Shehbaz were acquitted in a high-profile money laundering case. “Mr Bajwa congratulations to you and few with you. Your plan is really working and all criminals are getting free at cost of this country. With these thugs getting free, you have legitimised corruption. How you predict now the future of this country (sic),” he said. Speaking to reporters outside a sessions court in the capital, the PTI leader said he was not arrested for breaking the law, violating the Constitution or fundamental rights.

He said he was arrested for “taking one name – of Bajwa – and that is the violation”. When asked who arrested him, he said it was the FIA. When pressed about what case, he alleged he was tortured by “agencies”. “A parliamentarian has been unclothed,” he said. “I am telling the nation.”

Swati is the third senior leader of the Imran Khan-led PTI who has been arrested by the FIA after Saifullah Khan Nyazee and Hamid Zaman. However, Nyazee and Zaman are being probed for their alleged involvement in the prohibited funding to the party.

Confirming the development, PTI Secretary General Asad Umar condemned the move and demanded that Swati be released immediately. The PTI has often been accused by government functionaries of using social media against state institutions and running smear campaigns.