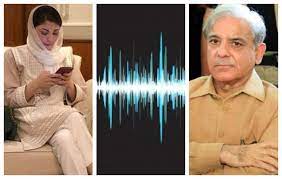 An additional alleged soundbite from Prime Minister Shehbaz Sharif has surfaced on social media, suggesting that the problem of audio leak is far from resolved.

Several audios that appear to be from government officials and PTI leaders have surfaced recently. A powerful inquiry committee has been established by the PM to look into the matter, including the leaks that involved the PM House. Imran Khan, a former prime minister, has also called for the creation of a JIT to look into the bugging of the PM House.

PM Shehbaz can be heard discussing the selection of his special assistants with an unnamed person in the most recent audio leak.

The unidentified person can be heard telling PM Shehbaz that Economic Affairs Minister Ayaz Sadiq has communicated to him that the PPP is asking “shares” for SAPM as well.

“Yes, Bilawal had spoken to me about it,” the PM responded.

The person then tells the premier to look into the matter as the government already has to appoint “Zafar Mehmood and Mr Jahanzaib”, adding that he will share the final number of SAPMs with him later in the day.

“Share the document, it’s not just PPP but others as well,” PM Shehbaz responded.

However, the official then informs the PM that if PPP is accommodating then the JUI and MQM will also ask for shares. He goes on to say that the MQM is proposing the name of Malik Ahmed Ali, who had a “critical role” in the “deal”.

“Who?” asked the premier. To which he was informed that Ali hails from Karachi.

PM Shehbaz: Yes, Bilawal had spoken to me about it

Unidentified person: So look at it, we have to appoint Zafar Mehmood and Mr Jahanzaib. I will tell you a final number today

PM Shehbaz: Share the document, its not just peoples party but others as well.

Unidentified person: Then JUI and MQM will also ask for it. MQM is naming Malik Ahmed Ali, saying that he had a critical role in all this deal

Unidentified person: Sir, he is from Karachi