* Imran Khan says while he was the PM, actual rule was someone else's
* I don't want my own judge, army chief or head of NAB
* Rivals trying to hurl so much mud through fake 'dirty' videos so that people go against us 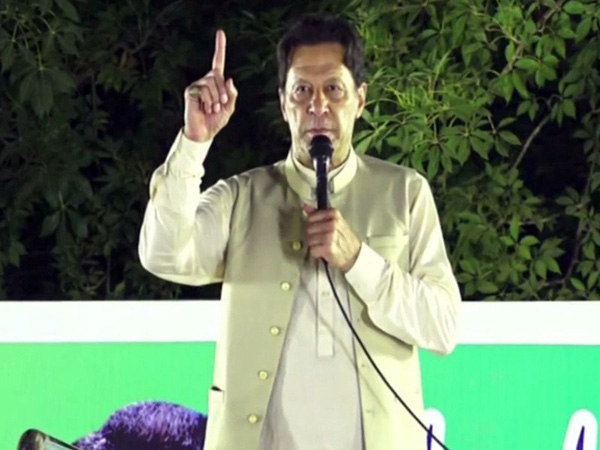 Former prime minister and Pakistan Tehreek-e-Insaf (PTI) Chairman Imran Khan has said that he does not fear “disqualification as he only fears the Almighty”, a private TV channel reported.

“They [rivals] are trying their best to prove that we [PTI] are also as dirty as they are [PML-N]. They are trying to disqualify me but I am going to court each day. I have no fear of disqualification. I don’t fear these [court] hearings and I have no fear of prison. I don’t fear anything because the one who says La Ilaha and it enters his heart, Allah makes him fearless,” he said during a public gathering in Sharaqpur.

Imran Khan said that the election is a part of Pakistan’s struggle for “Haqiqi Azadi”. “At this time, massive thieves have been imposed on our country,” the PTI chief said, adding that the nation’s money is stolen through corruption.

Khan said that politicians go abroad to make deals and then return. The former premier added that the nation’s tax money goes into repaying debt instalments. “For corruption, they destroy institutions which hamper theft. They destroyed NAB’s law,” Khan said, adding that the nation cannot get hold of “thieves” who send money abroad.

Imran Khan said that the rulers are trying to prove to the masses that Imran Khan and former premier Nawaz Sharif are the same. “I am not a jackal like Nawaz. He fled abroad but Imran is going nowhere. Don’t compare me to this thief.”

He said that the rulers have stooped so low that they have even made fake audios and “dirty” videos of him. “They’re trying to hurl so much mud so that people go against us,” he added. Commenting on the government destroying the country’s judicial institutions, the PTI chief said: “Massive thieves are spared.”

Speaking about his recent brush with the “prohibited funding” case, the PTI chief claimed that the government is trying to get him disqualified. PTI chairman asked for an investigation regarding the cypher which, according to him, was part of the conspiracy to topple his government in April. “Whenever the cypher is probed, it’ll inform the nation that Imran Khan rejected slavery,” he said, adding that he neither wanted to steal nor conceal his corruption.

Khan said that he didn’t want his own judge, IG, army chief or the head of NAB.

“I want to bring people on merit who can help the country and strengthen institutions,” the former PM said.

Speaking about the audio leaks, Khan alleged that his phone was being taped when he was the prime minister. “I ask the agencies, who are responsible for this? How did this happen?” PTI chief questioned. The former premier said that he will go to court to have the security lapse probed and to find out who was behind it.

PTI Chairman Imran Khan Wednesday told his supporters to gear up as he could give a call for the anti-government long march to Islamabad at any moment. Speaking at the Insaf Students Federation’s (ISF) convention in Lahore, the PTI Chairman said: “It won’t take long now. You should remain prepared every day for my call.” In his bid to up the ante against the government, Khan has been holding repeated rallies and gatherings across several cities in Punjab and Khyber Pakhtunkhwa.

Imran Khan said that while running the country was supposed to be his responsibility during his time as the prime minister, the actual rule was of “someone else”.

The former prime minister made the latest claim in an interaction with journalists in Lahore. He further said that if “even half the power would have been given” to him in his three and a half years in power, his government would have competed with the performance of Sher Shah Suri – the famed founder of the Sur Empire.

Imran said his government had been “weak” when it came to power and had to seek coalition partners, adding that if the same situation were to arise again, he would opt for reelections and seek a majority government or none at all. “Our hands were tied. We were blackmailed from everywhere. Power wasn’t with us. Everyone knows where the power lies in Pakistan so we had to rely on them,” he said without elaborating any further on who he was referring to.

“We relied on them all the time. They did a lot of good things too but they didn’t do many things that should’ve been done. They have the power because they control institutions such as NAB (National Accountability Bureau), which wasn’t in our control.”