* Alvi says not a 'broker', but making efforts to bring people closer
* Freedom of press critical to a flourishing democracy
* MNAs with thin attendance show least interest in address 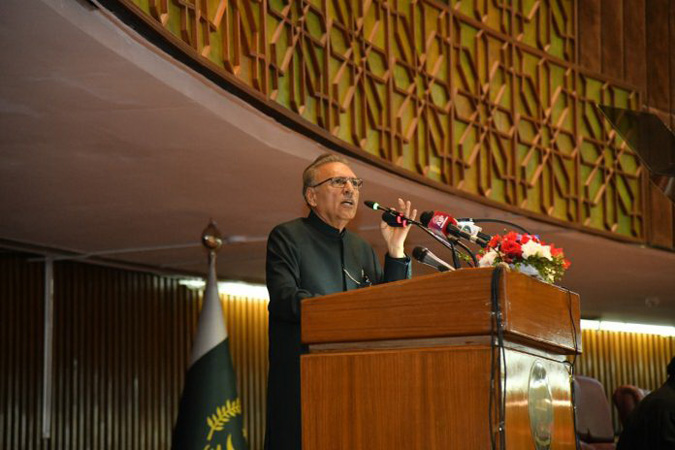 President Dr Arif Alvi, in an address to the joint session of the Parliament on Thursday, called on politicians to end polarisation and decide on an election date by coming together.

“People can only be united if politicians are united,” he said, highlighting that eliminating differences was the “need of the hour”.

The 15th National Assembly witnessed the fifth and last Presidential address to the Parliament under clause (3) of Article 56 of the Constitution of the Islamic Republic of Pakistan. The session was jointly chaired by the speakers of the lower and upper houses of Parliament including National Assembly Speaker Raja Pervez Ashraf and the Senate Sadiq Sanjrani.

The session was sparsely attended, with the majority of MNAs missing from both benches. Those in attendance were seen freely mingling and talking amongst one another while the president was speaking.

President Alvi started by raising the issue of floods in the country and the national efforts made to meet the massive challenge. “I want to felicitate the Pakistan Army for helping victims while sacrificing their lives. The federal and provincial governments, PDMA (Provincial Disaster Management Authority), and NDMA (National Disaster Management Authority) all worked hard on the ground. I thank all of them,” he said.

Giving an example of the Netherlands, a country which is 19 times smaller than Pakistan but has far greater GDP than Pakistan, he said that it was important to look towards such countries and aim to adapt their technology to greatly enhance productivity to resolve supply issues.

Pointing to the future of a skill-based workforce for our growing youth population, he said it was important to focus on educating them but also imparting skills to make them productive. He noted that for a long time, Pakistan has been plagued with a brain drain with people who seek an education also seeking to leave the country. He said that this must be addressed. He also called for continuing policies formed by governments even after the governments changed. He argued that this was necessary to ensure the country remains attractive to investors, especially foreign investors.

Focusing on the adoption of information technology, President Alvi pointed to how countries smaller than Pakistan, in size, population or even GDP were far ahead of us.

With an increasingly connected world, he said that the issue of cyber security was a growing field of worry which requires urgent attention. He also made mention of the recent leaked audios from some of the highest offices in the country as a means to point to the severity of the indigenous expertise in this field.

The president termed freedom of the press critical for a flourishing democracy.

Noting that he had raised this matter with the prime minister in a letter last month, he lamented that in Pakistan media establishments were being pressured while their workers were targeted. He added that today is the time of social media. Highlighting the educative and informative aspects of social media could contribute positively to society, he said that it was not helpful to target social media activists.

“You can’t pick up social media activists and scare them into toeing a particular line,” he said. During his speech, President Alvi also called for granting overseas Pakistanis the right to vote. “I can only make a suggestion, but it is up to all of you if you wish to implement it,” he said.

Going on, the president lauded the nation for fighting terrorism. “The way we tackled Covid should also be commended. Our neighbors suffered huge damage due to Covid but we didn’t,” he said.

Bringing the Parliament’s attention towards education, Dr Alvi warned against neglecting the youth as he called for the inclusion of children who were out of school. “Members of parliament must focus on this. I have spoken to Ulema that mosques should have sessions to provide school education. If you can’t provide education to children, give them skills,” he highlighted. The president said that online education could be used for infusing knowledge among the youth. “There are good education institutions that can help in this initiative,” he said.

Pakistan also needed to build a mechanism to provide employment to the people, he added.

Also, stunting was another problem Pakistan was facing. Furthermore, he appreciated the Benazir Income Support Programme and Ehsaas Poverty Alleviation Programme for their performance. He also thanked the Bill Gates Foundation for its polio eradication efforts in the country. During his speech, Dr Alvi particularly highlighted the importance of curing diseases linked to mental illnesses stressing that there were society’s “silent killers”.

“We need to make cures affordable and increase the number of medical practitioners. We need to raise awareness about telehealth helplines and educate the poor segments of our society regarding it,” he said. Moreover, the president said that women should be given chances to work in public offices and urged lawmakers to work on eliminating harassment.

Meanwhile, President Alvi denied “brokering” any deal in the political scenario, however, said he always tried in his own capacity to “bring people closer”.

“I am not a broker. I only make efforts to bring people closer,” he said in response to a question during an interactive session with journalists, at the Aiwan-e-Sadr.

Asked if he played any role in mending ties between Pakistan Tehreek-e-Insaf leader Imran Khan with top government officials, the president said, “Even in conflict within a family, people contribute on their part to sort things out. This is never an easy job”.

On prospects of the success of his efforts, the president said he could not predict the results, however, added that “the efforts must be carried on”.