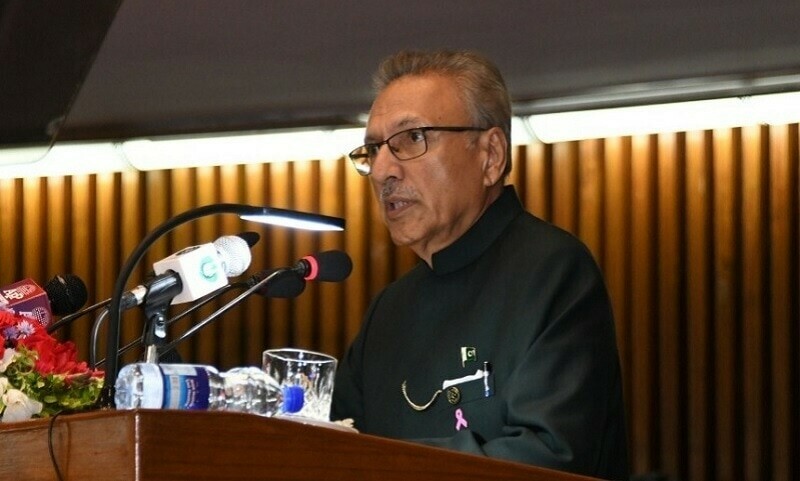 ISLAMABAD: President Arif Alvi Thursday reiterated that free and fair elections remain in demand, suggesting adoption of Electronic Voting Machines (EVMs) to ensure transparency in the electoral process. The president was addressing a joint session of the Parliament to mark the beginning of the last parliamentary year of the current National Assembly.

“How will Pakistan stabilise, if every election is challenged,” he questioned, adding that polarisation should be addressed because this is the year of elections.

Amid the country’s growing political instability, President Alvi stressed the need for dialogue and urged to end polarisation.

“Overseas Pakistanis have the right to vote and they should be granted this right, as they work hard,” he said.

At the oustet of his address, President Alvi spoke about the nation’s most pressing issue — the catastrophic floods across provinces, which have claimed over 1,700 lives so far.

“The flood damaged our crops and Pakistan should pay attention to crop insurance, as it will help us get international aid and deal with the challenges,” Alvi said.

He stated: “Agriculture is the backbone of Pakistan’s economy and to improve the sector, it is important that we look at nations which can provide us with technical support in this regard.

“We must learn from a nation like the Netherlands which is 19% smaller than Pakistan but is the second biggest exporter of food in the world.

He also lauded the nation for standing up against terrorism and spoke about Pakistan getting out of the Financial Action Task Force’s (FATF) grey list. Speaking on Pakistan’s agreement with the International Monetary Fund (IMF) the president said: “We had a suitable agreement with the Washington-based lender.” He added that political stability was crucial amid sky-high inflation.

Commenting on the efforts put in to evacuate the flood affectees, the president said: “I would like to congratulate Pakistan’s armed forces who helped the flood-hit population despite challenges. I would also like to extend my gratitude to provincial governments, the federal government, the Provincial Disaster Management Authority (PDMA), the National Disaster Management Authority (NDMA), and non-governmental organisations (NGOs) for their efforts to help victims”.

The president added that if the support was not extended on a timely basis, it would have caused more human and economic losses. The president also pointed out the need for building dams given the situation of the recent floods in the country. Speaking about the state of education in the country, President Alvi emphasised the inclusion of out-of-school children.

“Members of Parliament must focus on this. I have spoken to ulema (clerics) that mosques should have sessions to provide school education. If you can’t provide education to children, impart some skills,” the president insisted.

He also underlined the significance of online education and to utilise it for instilling knowledge among the younger generation.

“There are good educational institutions that can help with this initiative,” the president remarked, as he stressed building a mechanism for the provision of employment to the masses.

The president also underscored the need for children to be prepared for the future by building their skills in the field of science and technology.

“Several smaller countries are ahead of Pakistan in cyber power, while our policies are weak in this respect,” he said.

Commenting on the state of Islamophobia in India, the president said that the country was “playing with fire.”

“The United Nations, Pakistan, and friendly nations worked [against] Islamophobia,” he said.

Speaking on the menace of corruption, the president said that corruption is within Pakistan and can be controlled. Pointing at the need for unity reiterated by Quaid-e-Azam, President Alvi insisted that there should be unity among leaders. “Unity is needed to end polarisation,” he maintained. Under clause number 3 of Article 56, the president must address the Parliament after each general election and the first session of the parliamentary year to inform the lawmakers of the “causes of its summons”.

This will be the shortest parliamentary year since it would consist of 310 days, given that the NA is not dissolved earlier. President Alvi was to address the joint session on August 14, but due to the apprehensions of the coalition government, the address was postponed.