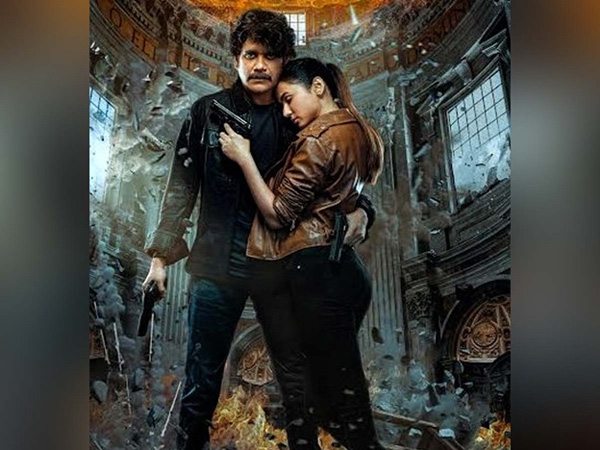 The Ghost glamorizes the life of an Interpol officer to an extent it feels like the agency should feature in Fortune’s ‘best places to work’ list. The film may trick you into believing that if you are an Interpol officer, your main job is basically chasing and killing bad people. And an Interpol cop can do that between 9-5 and then go back to his home, take a nice bath, pour a drink for himself/herself, and relax feeling proud of the job well done. Wake up the next day and repeat. And the Interpol cop also gets to take a lot of fancy and very expensive yacht vacations with a beautiful co-worker. Drinks, parties, beautiful partners, a fancy house, good pay, a closet full of guns and katana swords and an action-packed life – who doesn’t want a vocation that offers such a life?

Vikram (Nagarjuna) is living this dream with his girlfriend Priya (Sonal Chauhan), who is also his co-worker. The first time we see them is when they ambush a terror camp. Just the two of them take on a battalion of terrorists and emerge out of it without a scratch. The scene reminds us of the climax scene from Mr. & Mrs. Smith, when the couple performs a kind of romantic tango amid a rain of bullets fired at them. Vikram and Priya even find some time to grab a kiss amid all the action.

From there, the tone of director Praveen Sattaru’s movie shifts. Vikram is pissed after he botched up a rescue operation owing to a bad decision he makes. A young boy dies as a result and Vikram goes on a killing spree. You are not alone if the storyline kind of reminds you of John Wick. We just get a glimpse of Vikram’s rage, before Praveen again changes the mood of the movie. Now, we are in Vikram’s tragic backstory, the sacrifices of his foster father and his troubled relationship with his foster sister. Vikram has given up his job and now dedicates time to protecting his sister Anu (Gul Panag) and her teenage daughter Aditi (Anikha Surendran). And he’s not good at the parenting stuff as he uses a stun gun to discipline Aditi, who is spoiled by her privileged status.

What follows is a predictable narrative that makes The Ghost neither cheeky as Mr. & Mrs. Smith nor entertaining as John Wick. It’s a 150-minute wannabe neo-noir action-thriller that tests our patience.