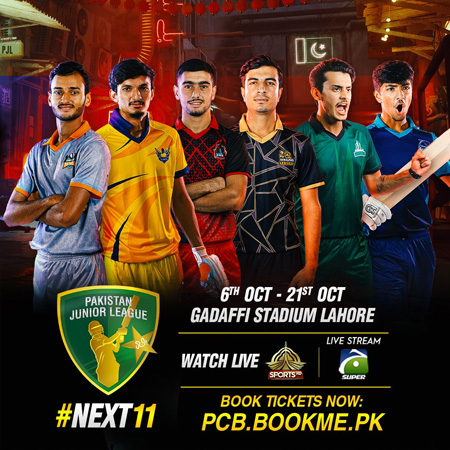 LAHORE: The inaugural Pakistan Junior League (PJL) rolls into action at Gaddafi Stadium here Thursday. The tournament, a T20 league for Under-19 cricketers from around the world and brainchild of Pakistan Cricket Board (PCB) Chairman Ramiz Raja, aims to develop teenaged players in a competitive scenario. The tournament will be played in a single-league format, with six sides in action, and the top four going through to the playoffs, and a final, on October 21. In all, there will be 19 matches in 16 days, featuring the best local talent as well as overseas players. To avoid clashing with the Pakistan Super League (PSL) eco-system, the PJL has picked other cities with which to associate the teams. The six teams — Bahawalpur Royals, Gujranwala Giants, Gwadar Sharks, Hyderabad Hunters, Mardan Warriors and Rawalpindi Raiders — will compete for the winners’ purse of PKR 10million and the impressive tournament trophy. The runners-up will be given PKR5million.

Each squad contains 15 players, including four from overseas. Selection was done by the head coaches of the teams, who have all been appointed by the PCB: Gordon Parsons (Bahawalpur), Toby Radford (Rawalpindi), Ijaz Ahmed (Gujranwala), Mushtaq Ahmed (Gwadar), Abdul Razzaq (Hyderabad), and Abdur Rehman (Mardan). The 15 players in each team are in three different categories: Elite (four players), Premier (five) and X-Factor (six). The salary slabs are US$ 16,000 for Elite, US$ 12,000 for Premier, and US$ 6000 for X-Factor. The PCB will be covering all costs, including the players’ salaries. Its board of governors had approved a PKR 15 billion (US$ 66.33 million approx.) budget for the 2022-23 season, out of which 78% has been allocated for cricket activities. The PJL expenses — logistics, salaries, broadcast — will presumably come from that.

Goal behind the league: “A young apprentice can be moulded into a genius with the right environment, which we intend to create in this format,” Ramiza had said at the time of launching the tournament. The league is meant not only to identify talent, but to nurture them, and close the gap between the Under-19s level and the highest level of cricket. All this, one might say, is what the higher levels of domestic cricket do. There is a structured pathway for age-group players in most parts of the world, from the Under-15s to the Under-19s. In Pakistan, historically, age-group players come through playing the longer formats of the game – two- and three-day matches, alongside one-dayers. It is then narrowed down and, if all goes well, there is a chance to play the Under-19 ODI World Cup, after which players break into the first-class circuit. Pakistan cricketers have traditionally not been exposed to the T20 format during their development phase. But since the start of the PSL in 2016, where each franchise is required to field at least one emerging player in every game, a few new faces have come to the fore. The PCB is hoping that the PJL will build on that.

Opening ceremony: Before the opening match, an action-packed curtain raiser will be staged at the Gaddafi Stadium from 6:15pm with dazzling fireworks and performances from popular youth band Young Stunners and renowned singer Asim Azhar, the star acts of the evening. The toss will take place at 7:00pm with the first ball to be bowled at 7:30pm. The Giants will take on the Warriors in the tournament opener. The tournament will be broadcast live on PTV Sports and live streamed on Geo Super’s App and Geo Super’s YouTube and Facebook pages in Pakistan. Live streaming will be available on the PCB YouTube/Facebook and PJL YouTube/Facebook channels for the rest of the world. The tournament broadcast will be done through a 22 camera full HD production including enhancements such as Buggy cam and drone camera. The commentary panel for the inaugural edition includes prominent commentators Daren Ganga, Dominic Cork and Mike Haysman. Former Pakistan captain Sana Mir, former Zimbabwe player Tino Mawoyo and seasoned broadcaster Sikander Bakht will also be a part of the panel. Roha Nadeem will be the presenter.

Spectator entry: Spectators can buy affordable PJL match tickets (PKR100 each) outside the Gadaffi Stadium at the Archery/Liberty entrance and the Gulberg College entrance. Under 18s can enter the stadium for free by presenting school ID card at the ticket booth. Online purchase of tickets has commenced, fans can book tickets by visiting www.bookme.pk or by calling Bookme helpline @ 042111266563.