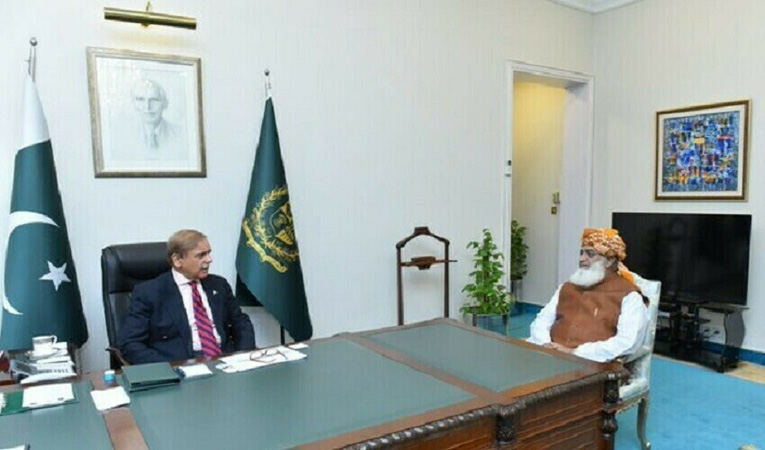 Members of the coalition government on Wednesday unanimously decided to foil any attempts to lay siege to the federal capital – the only place where the federal government is contained with the main coalition partner not enjoying any provincial representation, a private TV channel reported. This was decided on Wednesday during a meeting of the Pakistan Democratic Movement (PDM) members. The meeting was presided by Prime Minister Shehbaz Sharif. Earlier, Shehbaz had held separate meetings with PDM members including the movement’s president, Jamiat Ulema-e-Islam Fazl (JUI-F) chief Maulana Fazlur Rehman and Muttahida Quami Movement – Pakistan (MQM-P) Convener Khalid Maqbool Siddiqui. During the meeting, all coalition members agreed to resist and reject any pressure to hold general elections before the due time. During the meeting, PM Shehbaz asked collation partners of their views on an action plan against a possible ‘true independence’ march as threatened by Pakistan Tehreek-e-Insaf (PTI) Chairman Imran Khan.

The coalition parties unanimously backed the Pakistan Muslim League-Nawaz (PML-N) government, adding that no one will be allowed to march onto the capital and lay siege. “No one will be allowed to wage violence in Islamabad,” the participants of meeting agreed. The meeting also unanimously condemned the propaganda and social media campaign against the armed forces. The participants of the meeting also expressed concern that the country had been rule by someone who did not care about Pakistan or its institutions. The meeting also expressed satisfaction over the return of Senator Ishaq Dar. The meeting also discussed the country’s political, interior and economic conditions at large. During the meeting, the prime minister also took the alliance into confidence over the cypher and the audio leaks.