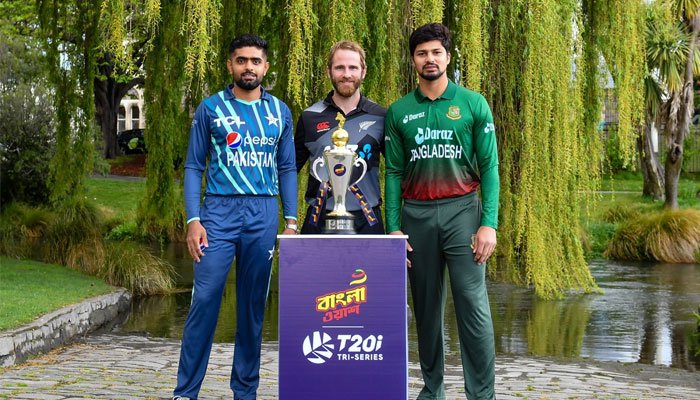 The trophy for the triangular series between Pakistan, Bangladesh, and New Zealand has been unveiled, two days before the first T20 match, which is scheduled to be played on October 7.

On Wednesday, the Pakistan Cricket Board (PCB) posted photos from the trophy reveal event on Twitter. Three teams competing in the event were represented in the photos by their captains.

The series kicks off on Friday with the match between Pakistan and Bangladesh 🏏#NZTriSeries | #BackTheBoysInGreen pic.twitter.com/Jggf4F88ge

The Green Shirts will start practicing on Thursday (October 6), after resting today. All the matches of the tri-series will be played in Christchurch, with the first fixture between Pakistan and Bangladesh due on October 7, and the series decider on October 14.

Those slated to play the ICC T20 World Cup will fly to Australia directly from Pakistan.

Following the tri-series, Pakistan’s squad will participate in the highly-anticipated mega T20 event and will travel back to Australia on October 15 for an action-packed World Cup 2022.

Prior to playing in the World Cup, the team will practice on October 17 and 19.

Sri Lanka, Namibia, UAE, and Netherlands are the teams from Group A who will play in the opening matches of the T20 World Cup on October 16.