Oktoberfest 2022 was no record year 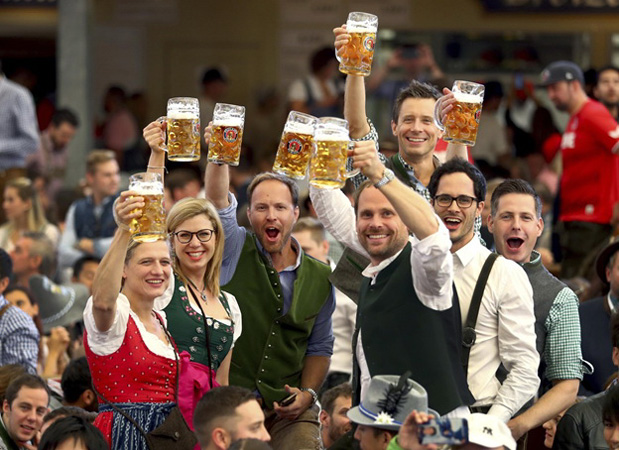 After two years of cancellations due to COVID-19, Munich’s Oktoberfest drew an underwhelming 5.7 million people. They drank 5.6 million liters of beer, despite the cool and rainy weather.

The “Wiesn,” as the locals call the Oktoberfest celebration in Munich, returned this year after a two year absence due to the coronavirus pandemic. This time around it took Munich’s mayor Dieter Reiter three hits of the rubber mallet instead of the usual two to drive the tap into the first beer keg for the opening. That got numbers mystics speculating about a connection with the fact that the festival was finally being held three years after the last one.

The keg-tapping ritual, complete with a cry of “O’zapft is!” (“It’s tapped!”), officially launched the festival and was followed by firecracker shots that rang out across the festival grounds. The world’s largest folk festival opened on September 17, 2022 and lasted two weeks.

Taking stock of the 2022 Wiesn

The 187th Oktoberfest didn’t draw quite as many visitors as in previous years, organizers said on Monday, chalking it up to the untypically rainy, cold weather. But this didn’t dampen attendees’ spirits, and lead to a relaxed and festive celebration that was slightly less packed than usual.

In 1987, the festival received a record 7.1 million visitors. In 2019, the last time it was held before the pandemic interrupted it, a total of 6.3 million people attended. This year, the two-week-long event hosted some 5.7 million guests from both Germany and abroad.

Due to the weather, “glühwein,” or warm mulled wine, was served for the first time in 14 years, but it was not a favored beverage.

According to anonymized aggregated data from German cellphone provider O2 Telefonica, this year’s attendees skewed toward the young and Munich locals. Around 21% of the visitors were aged between 16 and 29, in comparison to only 14% in 2019. Festival organizers attributed this to young people being “starved for dancing and partying” after years of pandemic restrictions.

Prices on the fairgrounds have risen considerably. On average, 2022 festival-goers paid 15.77% more than at the last Oktoberfest in 2019 for a beer, which is traditionally served in a “Mass” mug, which holds one liter.

Tabs like the one below, showing half an organic duck that had a €53 price tag, made the rounds on social media.deut

While people were partying in the tents, the fairground entertainers outdoors were languishing. The weather was wet – who would want to ride a flying chair ride in pouring rain?

As a consequence, some rides were only open for a few hours at a time. Rising inflation also meant people had less money to spend, and the festival grappled with inventory problems due to interruptions in supply chains, as container ships with coveted goods from China are stuck on the world’s oceans. Lottery booth owners had a hard time getting the requisite teddy bears and stuffed animals for their booths, and shooting gallery operators lacked plastic roses. For the 2022 Oktoberfest entertainers, the festival brought financial losses.

The number of coronavirus infections in Bavaria has increased. On Monday,

according to figures from the Robert Koch Institute, the seven-day incidence of coronavirus cases per 100,000 people had reached 673 in the state of Bavaria and 767 in Munich. For Munich, the incidence represents an increase of about 147% compared to the previous week.

Beer flowed freely in the tents on the fairgrounds, and servers often have to put up with a lot. Reported cases of sexual harassment and assault increased at the Wiesn in 2022, according to the Munich police, stating that 55 female Oktoberfest visitors had reported sexual or physical violence on the festival grounds – 10 more than in 2019.

This year, whether because of the cool weather or to try and ward off sexist remarks and sexual aggression, fewer women wore revealing dirndl dresses with plunging necklines and instead chose considerably more buttoned-up blouses.

The song “Layla,” controversial because of its sexist content, topped the German charts this summer for nine weeks – and was also this year’s Wiesn hit. A debate about possibly banning it in beer tents had the opposite effect.

After Markus Söder, the head of the Bavarian government, said at the start of the festival that people should be allowed to “sing what they want,” there was no stopping people singing “Layla” at the top of their lungs.

On a clear day, visitors can see the Alps from the Theresienwiese fairground. But no matter the weather, festival-goers have an unobstructed view of what has become known as Puke Hill, a grassy hill behind the beer tents littered with drunks throwing up, urinating or passed out; as well as couples making out and, at times, drug deals.

In 2022, organizers had a police patrol and installed cameras to try and prevent excesses.

Oktoberfest 2022 had no shortage of celebrities. Professional soccer players including Manuel Neuer und Thomas Müller, and music stars like HP Baxxter, frontman of the techno band Scooter, all showed up for the fun. So did Arnold Schwarzenegger, the 75-year-old former governor of California and actor, who visited Oktoberfest with members of his family.