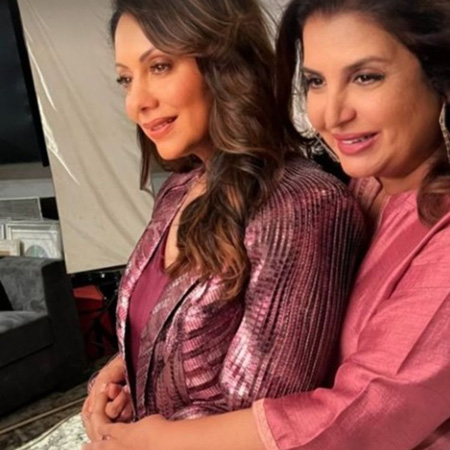 Farah Khan has praised Gauri Khan for not letting Bollywood and stardom affect her as a person. Farah said she has known Gauri for over three decades, but the interior designer continues to be the same middle-class Punjabi girl. Farah also called Gauri an ‘exceptional mother’ to Aryan Khan, Suhana Khan, and AbRam Khan.

Farah recalled that she met Gauri just days after the latter’s marriage to Shah Rukh
Khan, and they hit it off as friends immediately. The filmmaker made the
comments in the latest episode of Gauri’s show Dream Homes with Gauri Khan in which the interior designer collaborates with Bollywood celebrities to transform their homes.

Farah Khan said in the episode, “She (Gauri) got married and Shah Rukh brought her to Goa. We were shooting for Kabhi Haan Kabhi Naa. And I met her on a Goa beach. She was a free spirit. She was wearing a swimsuit and a sarong. We bonded literally in the ocean. From then on it felt like I had met some very old college friends or school friends, because we all got along like a house on fire. So I know her from 1990, which is 32 years. The best thing about Gauri is that she hasn’t changed at all, and that’s a very good, a very rare trait that you find in Bollywood with the success and the money and people fawning over you. She has remained a middle-class Punjabi girl to date. I think that for me, is the best part about her.”

Farah added, “Gauri is doing too well. I am very proud of her. I know her from the time when she was a young girl who just got married and came from Delhi. She is doing too good. She is an exceptional mother, she is a great wife. She runs a great house. Her children are beautiful. She handles everything. I have seen her with her parents, her mother, her family. She is very family-oriented and she is a yaaron ka yaar (friend amongst friends). If she is your friend, then she is your friend for life.”

Gauri Khan, nee Chhibber, tied the knot with Shah Rukh Khan in 1991. She met Shah Rukh in Delhi in 1984, before he became a successful Bollywood actor. Apart from her interior designing business, Gauri is also the co-owner of her and Shah Rukh’s film production and distribution company Red Chillies Entertainment.