* Imran Khan says security agencies must be questioned about who is responsible for audio leaks
* Pakistan's state secrets have been leaked to enemies
* For the first time, I am feeling as if I am a traitor of the country 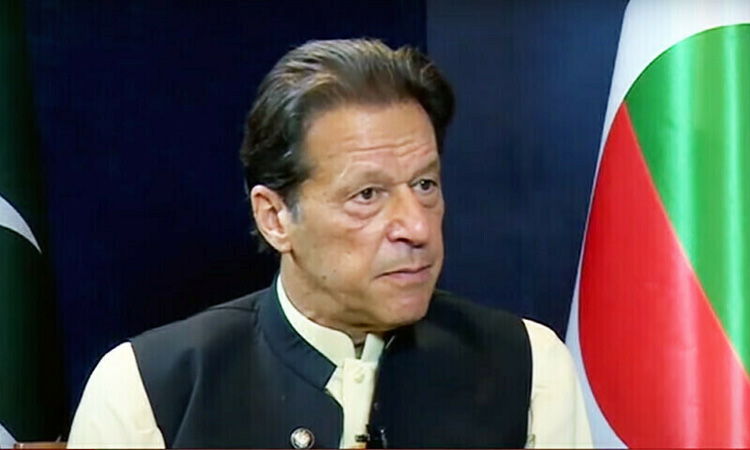 PTI chairman and former prime minister Imran Khan on Monday said that the job of intelligence agencies was to secure the country and not “political engineering”.

Terming the leaks a “massive violation of security”, the PTI chairman said the prime minister – given his position – talks about the state’s secrets and now, “all those things have been leaked to our enemies”.

Khan claimed that an “audio tape” of the conversations was recorded at the PM’s House, adding that not only the tapes recorded during his tenure were leaked but audios of Prime Minister Shehbaz Sharif have also been leaked. He also recalled that his residence’s security line was also breached and the conversation of his wife, Bushra Begum, was leaked as well – where she could be heard speaking to PTI leader Arsalan Khalid.

Imran said that the most important thing in the fiasco was the taping of the telephone connection of the highest office in the country. “This means that these audios will reach enemies as well,” he highlighted. “The point is that they would include so many more things, which may not be important for domestic politics, but might include state secrets.

“And the next question is that our security agencies […] someone will have to ask that who is responsible for such a security breach,” the former premier said. This should be understood, he went on, that this was a very serious security lapse for our country.

Commenting on the issue of the ongoing cypher controversy, Khan said that its master copy is lying in the Foreign Office. “They [government] should first ask the Foreign Office about the cypher’s master copy,” the former premier said, adding that the master copy first arrives at the FO and its copies are then sent to the Prime Minister’s house, president, and the chief of army staff.

He added that President Arif Alvi sent the cypher’s copy to Chief Justice Umar Ata Bandial and that his party had sent one copy to the National Assembly speaker. “What cypher are they talking about being stolen?” Khan questioned the government, adding they “initially lied” that there is no cypher. Khan added that the PTI government had declassified the cypher during the last cabinet meeting. “Read the minutes of our last cabinet meeting, we have declassified the cypher […] the government cannot hold any proceedings on it,” he said, alleging that PM Shehbaz was a “beneficiary” of the foreign conspiracy.

When asked about PTI’s upcoming long march, Imran said that an “unimaginable” sea of people will march toward Islamabad.

“It will be the biggest in the history of Pakistan and no one can picture what will happen. But I won’t tell exactly what will happen,” he said, adding that only a close group of people knew the details.

“Everything we say is leaked […] our phones are taped […] for the first time I am feeling as if I am a traitor of the country whose being taped,” the PTI chief added.