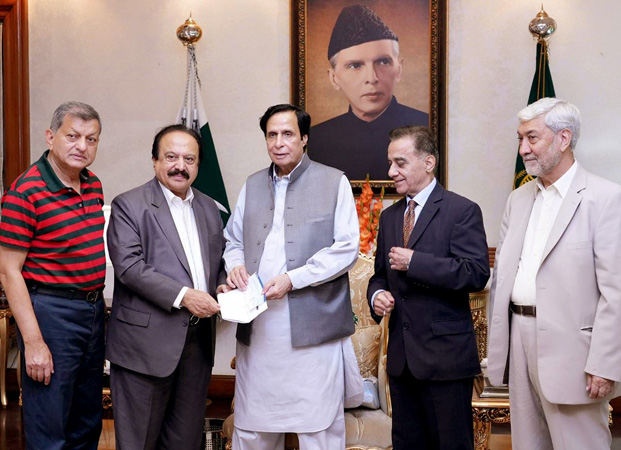 GM Faletti’s Hotel Irshad B. Anjum and Shahid Butt, who came all the way from Canada, also gave the cheques for the amount announced during the telethon to the CM for the flood relief fund, says a handout.

Speaking on the occasion, Parvez Elahi appreciated the passion of expatriates to help the flood victims. With the money collected in the fund, the rehabilitation of the flood victims is going on by the provincial government, he mentioned.

The CM said that the passion of overseas Pakistanis, who gave money on the appeal of Imran Khan, is appreciable as billions of rupees have been collected on his appeal. “Expatriates have proved, on every occasion, that they are loyal to Imran Khan. Opponents only make up words while Imran Khan shows by doing,” he maintained.

Parvez Elahi further said the provincial government was fulfilling the responsibility of rehabilitation of all flood victims with its resources and donations from philanthropists and overseas Pakistanis. I took the lead to visit Rajanpur, Taunsa and DG Khan to inspect the flood-affected areas there, he concluded.

Meanwhile, the CM expressed his concern over drug peddling in educational institutions and vowed that strict legislation will be enacted to stop it.

“The draft of the Punjab Control of Narcotic Substances Act, 2022 will be finalized soon to make it law after passing from the Punjab assembly as soon as possible,” he stated.

“It is the joint responsibility to save the new generation from the menace of drugs,” he stressed, and pointed out that the foreign ambassadors, including the World Bank, have appreciated the efforts of narcotics control and offered their cooperation.

The CM disclosed that an autonomous agency will be established in Punjab to deal with drugs.

“The owners and employees of educational institutions would also be held responsible for the sale and purchase of drugs and those assisting the sale and use of drugs would be brought under the net of the law,” he stated.