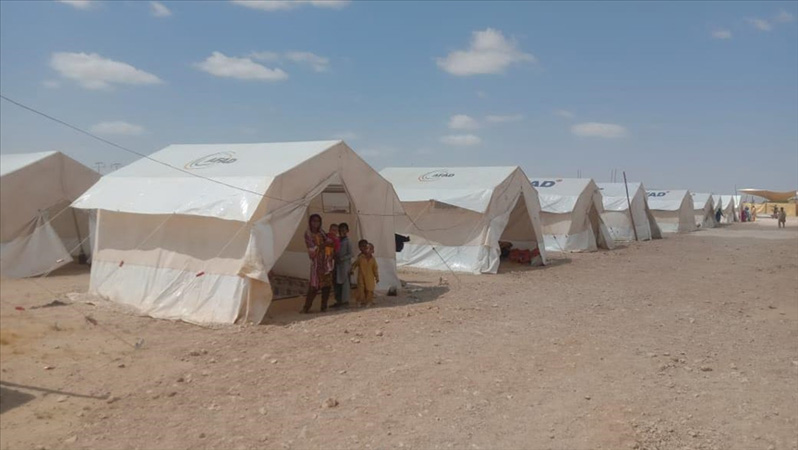 Türkiye’s state-run disaster and management agency has set up a temporary housing facility in southern Pakistan for the victims of recent super floods.

Named after Turkish President Recep Tayyip Erdogan, the tent city has been set up by the Turkish Disaster and Emergency Management Authority (AFAD) in collaboration with the Pakistan Air Force (PAF), and Baitussalam Trust in Bholari, a remote village located some 98 kilometers (61 miles) from the country’s commercial capital Karachi.

At present, the facility, comprising 200 tents, is accommodating over 500 people displaced by the catastrophic floods last month.

This is the second housing facility established by the AFAD for flood victims across Pakistan. Another tent city established last month is operating in the Dadu district of southern Sindh province.

Addressing the ceremony, the Turkish consul general noted that the devastation caused by rains and floods is “so huge,” and that Islamabad alone cannot handle it.

Therefore, he added, Ankara will stand by Pakistan in its efforts to mitigate the aftershocks of the catastrophe.

Not only in Türkiye, but the Turks living abroad “have also felt the pain of their Pakistani brothers, and are ready to help them.”

The Turkish government, he said, plans to set up the third tent city in Thatta district of Sindh province, which has been hit hard by the super floods.

Over 30,000 tents have already been distributed by the AFAD in 19 different regions, providing temporary housing to around 200,000 displaced people, AFAD’s deputy head, Bozkurt, said in his remarks.

The AFAD has established an “air bridge” and the “Goodness Train Expeditions” in collaboration with the Türkiye’s Ministry for National Defense and the Ministry for Transport and Infrastructure to ship humanitarian aid to the flood-battered areas.

So far, Ankara has sent 14 planes and 13 “goodness trains” loaded with relief goods, including tents, food items, medicines, kitchen items, vaccines, and other supplies to the flood-hit regions, Bozkurt added.

A 15th plane, carrying malaria pills, tetanus vaccines and other medical supplies will arrive in Pakistan on Monday as the flood victims are grappling with an outbreak of several waterborne, eye, and skin diseases, he further said.

Air Vice Marshall Afzal, for his part, thanked President Erdogan and the people of Türkiye for standing by Pakistan in this time of need.

He said the capacity of the recently established tent city will be increased to 500 tents.

“The generosity and solidarity shown by the people of Türkiye at this testing time, exemplifies the longstanding friendship between the two nations,” he maintained

The drenching monsoon along with devastating floods inundated a third of Pakistan, aside from killing nearly 1,700 people and injuring tens of thousands since mid-June.

Torrential rains – 10 times heavier than usual – have also damaged nearly 45% of the country’s cropland, posing a serious threat to the country’s food security.

The government has estimated a staggering loss of $28 billion inflicted by the catastrophe on the already tottering economy, mainly in terms of infrastructure and agriculture.