The power in people 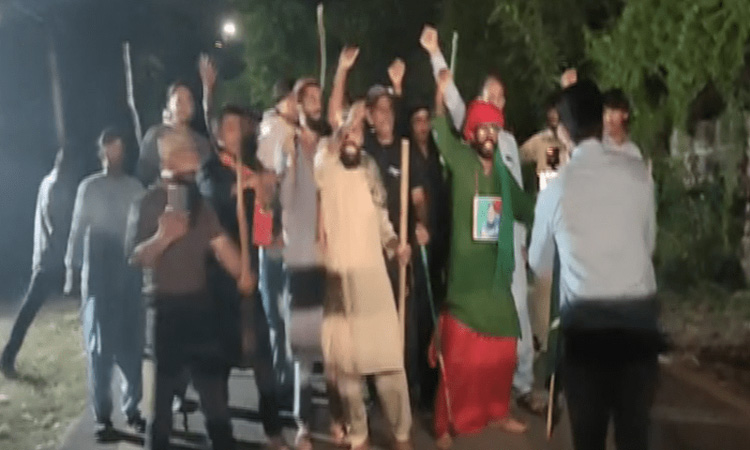 A judicial magistrate of Islamabad on Saturday issued arrest warrants for the Pakistan Tehreek-e-Insaf (PTI)’s Chairman Imran Khan on his continuous disappearance in a case pertaining to his ‘threatening remarks’ about a female judge and police high-ups.

The court of Judicial Magistrate Rana Mujahid Raheem had repeatedly summoned Imran Khan in the case but he failed to appear. At this, arrest warrants had been issued against him.

The court had ordered the station house officer (SHO) Margalla Police Station to produce the accused Imran Khan Niazi, son of Ikramullah Niazi, before the court after arresting him.

It may be mentioned that the capital police had registered FIR No.407 on August 20, against Imran Khan under sections 504/506 and 188/189 for threatening female judge Zeba Chaudhry and officials of Islamabad Police. However, the clauses of Anti-Terrorism Act (ATA) were removed from the FIR on the directives of Islamabad High Court (IHC). The case was shifted to the district court from the Anti-Terrorism Court (ATC) after the decision of IHC. Following the issuance of the warrant, the PTI leader Asad Umar warned the government to not arrest Imran Khan, saying that they will “regret” the decision. Meanwhile, former information minister Fawad Chaudhry said that the issuance of a warrant in such a “weak” case was pointless.

“Acircus has been created in the media by issuing warrants over pointless legal clauses and a foolish case which was not needed,” he wrote on Twitter. PTI leader Murad Saeed, in a video message from Banigala, claimed that a prisoner van had arrived at Imran Khan Chowk. He called on party supporters in Islamabad to reach the party chairman’s residence, adding that Imran was the PTI’s “red line”.

“If they try to cross the red line and enter Banigala then we will make Islamabad a jail for you by tomorrow morning.” Refuting all claims that Khan has left his residence for an unidentified location, Senator Shibli Faraz shared a picture of the PTI chief feeding his dogs at his residence. “Imran Khan feeding dogs at this very moment while news rife that police intending to arrest him,” he wrote. Meanwhile, the PTI workers began congregating at former Imran Khan’s Banigala residence in Islamabad after his arrest warrant was issued. The workers vowed to prevent the arrest. The activists sais Imran Khan is their red line and they will never allow his arrest.