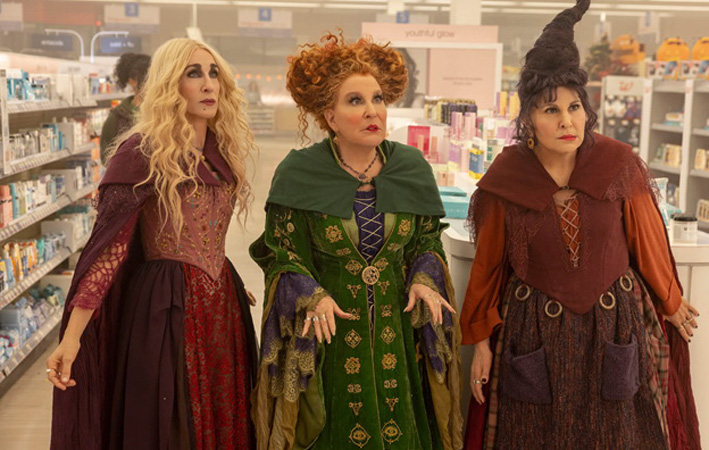 Hocus Pocus wasn’t a hit when it opened in 1993, not helped by Disney’s bizarre decision to release this Halloween-themed movie in, erm, July. But over the years, it’s grown into a cult classic that legions of fans rewatch religiously every October. When Bette Midler toured the UK in 2015, she performed the film’s (literally) bewitching signature song, ‘I Put A Spell On You’, in character as Winnie Sanderson. Fans have been clamouring for a sequel for years – Midler said back in 2014 that the ball was in Disney’s court – so this tardy follow-up should be slam dunk for Disney+. But as last year’s merely passable Home Alone reboot proved, reinventing a beloved piece of ’90s IP for the streaming era is no simple trick.

Thankfully, this sequel from experienced comedy director Anne Fletcher (The Proposal, The Guilt Trip) is much more satisfying. It begins with a sort of origin story set in 17th-century Salem featuring younger versions of spell-conjuring sisters Winnie, Mary and Sarah Sanderson. It’s fun seeing Taylor Henderson capture Midler’s Winnie mannerisms, but these scenes really serve to set up the present-day plot, where teen besties Becca (Whitney Peak) and Izzy (Belissa Escobedo) accidentally resurrect the Sanderson sisters (again). This time around, Winnie has revenge on her mind: when she realises the town mayor (Veep’s Tony Hale) is descended from a 17th-century nemesis, the poor man has a target on his back.

Jen D’Angelo’s script could have reintroduced the adult Witches sooner, but once they’re back on screen, Hocus Pocus 2 is an unstoppable romp. Nearly 30 years later, Sarah Jessica Parker’s flirty Sarah and Kathy Najimy’s manic Mary are still a fun foil for Midler’s gloriously haughty head witch. Scenes in which the Sanderson sisters are bewildered by modern-day technology aren’t massively original, but they are consistently funny: at one point, they mistake an Alexa device for a small woman trapped in a box. And because this film is set on Halloween night, just like the original, the witchy trio can pass for costumed-up revellers. At one point, they come face to face with a trio of drag queens impersonating them (RuPaul’s Drag Race stars Ginger Minj, Kornbread Jeté, and Kahmora Hall). It’s a cute way of acknowledging the original film’s huge LGBTQ+ appeal.

Hocus Pocus 2 isn’t completely spellbinding – Ted Lasso’s Hannah Waddingham deserves more screen time as a majestic Mother Witch, and a couple of the new teen characters are underwritten. But this thoroughly enjoyable film succeeds in offering a knowing (but not too knowing) spin on the campy original. When the sisters break into a rollicking rendition of ‘The Bitch Is Back’ – reworked as ‘The Witches Are Back’, obviously – one character deadpans: “Why are they singing?” It’s also really quite touching at the finish: a trick few sequels of this ilk manage to pull off.