How can ‘watchman’ stay neutral? 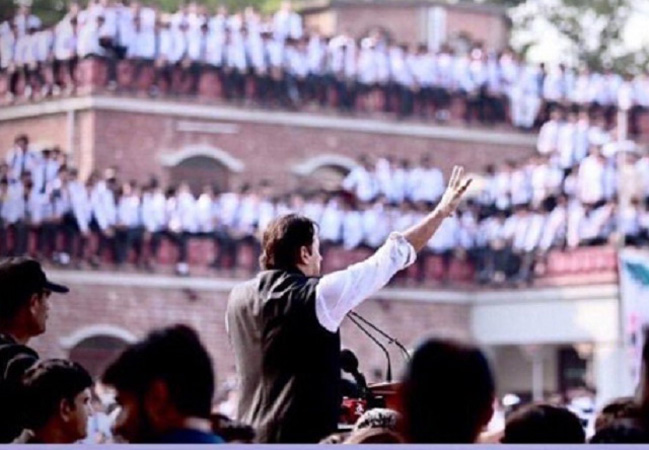 Former prime minister and PTI chairman Imran Khan on Friday asked the “neutrals” who was responsible for the security breach at the Prime Minister’s Office (PMO).

Imran’s statement comes after a steady stream of audio recordings surfaced of late, of allegedly candid conversations never meant to be heard by the public, of government figures in the Prime Minister’s Office.

He went on that if the “neutrals” were only responsible for cracking down on social media users, YouTubers, and television channels, then “who will protect the interests of the country”.

The PTI chief then addressed his supporters and reiterated that people who called themselves apolitical were, “in fact, animals”. “More than 2,000 years ago Aristotle said that if there is injustice and tyranny in a society, then everyone should stand up against it and be political.”

Imran said that if “we say we are apolitical, then we will be responsible for the injustices in the society”. About the acquittal of Maryam Nawaz and her husband Muhammad Safdar in the Avenfield reference, Imran Khan stated that laws were changed that prevented their conviction in corruption and money laundering case. “They made two changes to the law,” he stated, adding, “The first change is that if any fund comes from outside the country will not be admissible as evidence – if someone has stored their ill-gotten wealth abroad and are bringing it into the country, then that is not admissible.” “The other, all around the world to catch white-collar crime, if I am in government and my assets increased disproportionately to my income, then it is my responsibility to declare where I got the money, but they changed this law,” he pointed out. Imran went on to claim that everyone knows that the “four mansions worth billions in London are owned by the Sharif family, but they are telling the National Accountability Bureau (NAB) to prove it, but NAB cannot prove this.”

“This means white-collar crime cannot be caught in Pakistan, and Pakistanis have been told that if you want to mount a robbery on the state exchequer, make sure the haul is big because only a small thief will be caught,” he lamented. Imran Khan said the ruling coalition is not content with taking another National Reconciliation Ordinance (NRO) and is trying to make more money with Maryam Nawaz requesting the prime minister to help out her son-in-law in importing machinery from India – an act which is currently prohibited under the law. “At this, Shehbaz is giving her assurances that the criminal Dar will come and make it alright,” he alleged.

On the economic situation, Imran Khan said the rupee has devalued over 30 percent against US dollar since the ouster of his government, and said the masses are facing the worst inflation in the history of Pakistan. Subsequently, the PTI chief said that he was preparing the nation for his call against the “imported and corrupt government”, saying that he would set out against them even if he had to do it alone.