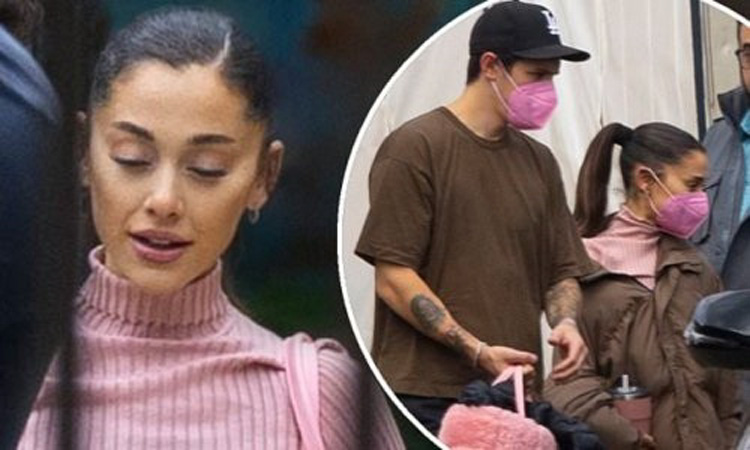 Ariana Grande officially has a new pov-from the Land of Oz, that is. The 29-year-old-who confirmed last November that she would be stepping into the shoes of Glinda the Good Witch for a movie adaptation of the musical Wicked-was photographed on set in London. For the filming shoot on Sept. 28, Ariana and husband Dalton Gomez were seen matching perfectly, with both wearing pink face masks and dark brown attire.

The glimpse at the “7 Rings” singer during filming serves as the first since she confirmed her role in the highly anticipated movie in 2021. While Ariana will portray Glinda, actress Cynthia Erivo will take on the role of Elphaba (the Wicked Witch of the West). Ariana announced the exciting news when she shared a photo of her Zoom call with her co-star and director to Instagram on Nov. 4, writing, “Thank goodness.”

The Voice alum also posted a photo of the flowers Cynthia sent her, which included a note that read, “‘Pink goes good with green. Congratulations Miss A, the part was made for you, I look forward to sharing this musical journey with you.'”

Ahead of her trip to film across the pond, Ariana opened up about her audition process earlier this year.

“I started hearing murmurs about a Wicked audition coming soon, so I went into full preparation mode, while I was also shooting The Voice,” she said in a makeup tutorial shared in May. “So, I was shooting and then doing lessons every day because I just wanted to be prepared for when the call came. I had no idea when it was coming, but I was just like, ‘I want to be ready to go in.'”

And although she blew her audition out of the water, that doesn’t mean she’s saying “thank u, next” when it comes to practicing how to nail her part.