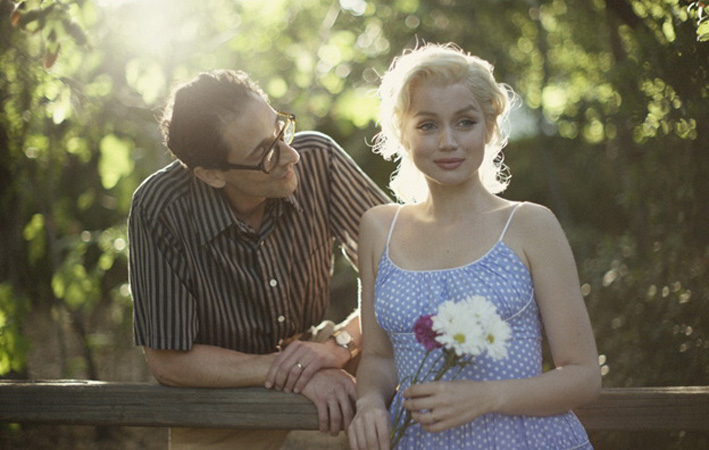 When writer/director Andrew Dominik claimed that Blonde, his hallucinatory hall-of-mirrors biographical film of Marilyn Monroe, would “offend everybody”, it wasn’t an understatement. No movie this year has been more dissected or proved as divisive. Some have chided Blonde – which is based on Joyce Carol Oates’ historical fiction novel about the icon – for taking liberties with fact, or sidelining Monroe’s achievements in favour of presenting her as a symbol for the lasting effects of childhood abuse. Others have pointed out that Monroe has no autonomy during the movie’s relentless onslaught of misery, fetishising her merely as a vessel for degradation, and questioned whether somebody seemingly so exploited in her life is being further used more than 60 years after her death.

If you’re expecting an accurate, multifaceted biography of Monroe, you’ll be sorely disappointed by Blonde, which doesn’t particularly have much to say about the star other than a surface-level Freudian ‘daddy issues’ interpretation. However, viewed as a fever-dream psychological horror about somebody unravelling, and how fame is the mask that eats the face, it’s dizzyingly audacious filmmaking.

At its centre is a seismic, raw performance from Ana de Armas as Monroe, who not only looks eerily similar to her, especially in the meticulously-recreated vintage footage, but also distinguishes the chasm between the haunted-and-hunted Norma Jeane and the peroxide-prison idol she becomes. During one scene in front of a mirror, she’s emotionally distraught and praying for her alter-ego to take over, as she transforms into the star we all know; her familiar camera-ready megawatt smile suddenly looking demonic and ghoulish.

Throughout, Dominik cuts the film’s cloth to suit Monroe’s psychological state, switching between monochrome and colour, and changing aspect ratios to illustrate her interior life. The result adds to the feeling that we’re never quite sure what to trust, or if what we’re seeing is real, and ensures we feel queasily captivated despite its bladder-testing 166-minute runtime, and oppressive grimness, assisted by a mesmerising score from Nick Cave and Warren Ellis.

The film begins with the young Norma Jeane living with her mentally-ill mother (Julianne Nicholson) who drives her into Hollywood while it’s on fire – a heavy-handed metaphor for Tinseltown – in an attempt to stay with her estranged father, before trying to drown her in a scalding bath.

Transforming into Marilyn Monroe, she’s subjected to more abuse, from executives who consider her a pretty face rather than a serious actor, from lovers (a bisexual throuple with the vulpine Charlie Chaplin Jr. and Edward G Robinson Jr.), to husbands (a violent Joe DiMaggio) to drugged-up assignations with a president (JFK). As Netflix’s first ever NC-17 rated film, it’s unflinching, including one well-reported scene from her birth canal’s point of view during an unwanted abortion, replete with talking foetus.

It’s not an easy watch and there is a lingering sense of a film trying to have its cake and eat it. It underlines the point that Monroe’s acting prowess was overlooked without focusing on her craft. Instead of showing you any of the ability she demonstrated in Some Like It Hot, it concentrates on her difficult behaviour on set. It complains she’s gratuitously treated as “meat” while the camera frequently lingers on de Armas’ naked body, leaving you wondering: are we witnessing the effects of misogyny or complicit in it? This hasn’t been helped by some seemingly problematic interviews conducted by Dominik. But there’s a humanity to de Armas’ performance that cuts through the exploitation and by immersing us at the centre of her slowly shattering psyche, it’s an ambitious trespass against good taste. Like any effective horror, Blonde unsettles you long after the credits roll.